Oil and gas companies can save time and money by reprocessing existing GeoStreamer 3D data in a new way to deliver impressive high-resolution images for shallow hazard assessments, instead of acquiring a new site survey.

SHAZ is an innovative reprocessing sequence for GeoStreamer multisensor data, that delivers images that replace dedicated site surveys. It can even be run on data originally acquired for exploration purposes. GeoStreamer SHAZ data are significantly richer in low frequencies than traditional site surveys and have a better spatial resolution. The SHAZ workflow works particularly well in shallow and medium water depths.

Prior to any drilling operation, site surveys assess the risk to people, equipment, and the natural environment.

The objective of a site survey is to identify all possible constraints and hazards from manmade, natural and geological features which may affect the operational or environmental integrity of a proposed drilling operation, and to allow appropriate operational practices to be put in place to mitigate any risks identified (OGP 2011, Report No. 373-18-1).

In addition to sidescan sonar acoustic seabed imagery, various seismic surveys have traditionally been used to map the overburden immediately beneath the seabed. The survey types can vary from conventional 3D seismic to ultra-high resolution 2D or 3D surveys. In deeper water settings, conventional seismic surveys are typically used for shallow hazard evaluation by increasing the sampling rate to 2 ms and by reducing the bin spacing of the subsurface image compared to standard 3D imaging.

In shallower water, the lack of near offset information in conventional 3D seismic is a limiting factor. As a result, the overburden is often imaged at high reflection angles, producing image gaps that are visible as a significant acquisition footprint. Consequently, the use of conventional 3D seismic data for hazard evaluation in water depths of less than 500 meters is very limited.

The PGS multisensor GeoStreamer acquisition platform not only records data that are rich in both low and high-frequency information but importantly it also yields direct access to the various seismic wavefield components that can be uniquely utilized to image the near-surface geology with Separated Wavefield Imaging (SWIM). By designing imaging workflows that combine high-resolution 3D processing with SWIM, it is possible to carry out very detailed hazard analyses of potential drilling locations using existing GeoStreamer data.

SHAZ processing aims to produce high-resolution images of the overburden by processing at a 2 ms sampling rate and on a dense image grid of 6.25 x 6.25 m. The velocity model for the shallow subsurface is built using a robust FWI workflow enabling very detailed velocity estimation to ensure accurate imaging of very small geological structures. Both primaries and SWIM (i.e. multiple) volumes are intelligently merged to what can be considered a full wavefield image of the very shallow overburden.

The SHAZ workflow results in seismic images characterized by very stable and compact wavelets all the way from 2 to ~225 Hz in both shallow water (30-40 m) and medium water depth (~500 m) settings. The seismic resolution at the high-frequency end of the spectrum achieved with SHAZ processing of GeoStreamer seismic compares very favorably with that of dedicated site surveys. However, GeoStreamer SHAZ data tends to be significantly richer in low frequencies. This additional low-frequency content (1-2 octaves) results in a much shorter wavelet that improves the spatial resolution of the SHAZ volumes. 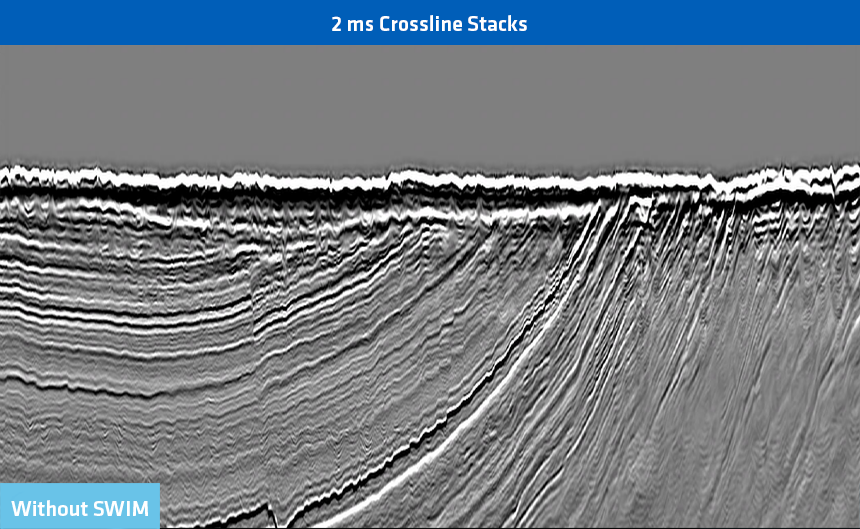 Reprocessing using SWIM to improve resolution and AVO in the shallow part of the section revealing shallow gas hazards in the area (arrow).