Shallow hazard identification and multiple removal throughout the seismic section are additional benefits of using SWIM. This highly flexible solution can also be used on ocean bottom seismic and node data.

Oil and gas companies can save time and money by reprocessing existing GeoStreamer 3D data in a new way to deliver impressive high-resolution images for shallow hazard assessments, instead of acquiring a new site survey. Read more.

SWIM imaging principles can also be applied to ocean bottom seismic (OBS) surveys using reciprocity turning the traditional dense source grid of OBS surveys into a set of very dense ‘virtual’ receiver locations.  By so doing, the image and illumination of the subsurface can be enlarged to the area covered by the source grid.

By invoking simplifying assumptions about the sea surface shape and its reflective properties, SWIM can also be applied to traditional hydrophone-only data.

Using Multiples to Remove Multiples Throughout the Section 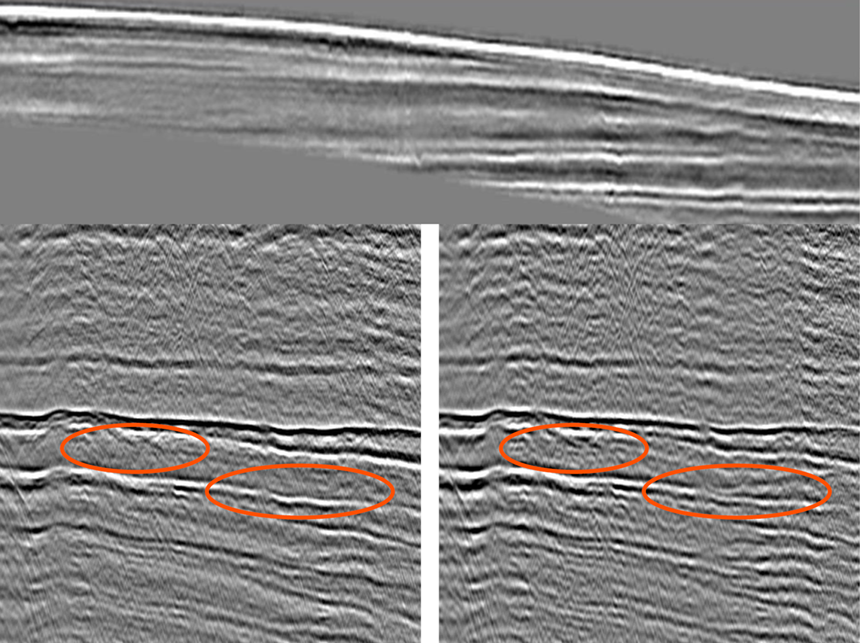 Through improved shallow imaging in shallow-water scenarios SWIM allows for the prediction of multiples from not only the seafloor but also from layers below the seafloor (top image). This leads to the accurate removal of unwanted multiples deeper in the section. The left image highlights locations where shallow multiple energy is not predicted when using primary only imaging for the a priori reflectivity cube. A complete multiple image is shown on the right which is produced using SWIM to predict seafloor and near-surface multiples. Data: Wintershall.

Accurate imaging of the overburden using SWIM provides high-resolution images suitable for shallow hazard work, helping to mitigate drilling risks.  Channels and structures that can cause a borehole to collapse can be identified as well as shallow gas targets that could cause a blowout.