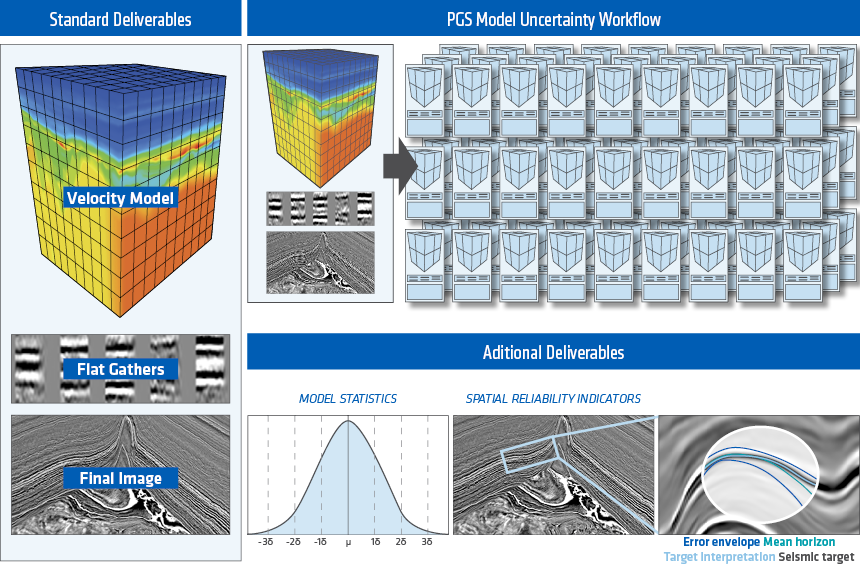 Reservoir evaluation is often based on the interpretation of one seismic image. The amount of uncertainty associated with this image is unquantified. When building a model tomographically, a number of models can all realize the same output, flat gathers. The various models will all be different, as might the image resulting from the migration with those models.

The quality and reliability of the produced image is usually evaluated by comparison with auxiliary data such as well markers, or by assessing the overall degree of gather flatness or structural simplicity that is displayed in the final pre-stack depth images.

PGS has recently developed a new analysis tool that quantifies the inherent image uncertainties. The additional metrics can be directly used by interpreters to improve the understanding of the reliability of their reservoir interpretation and assist in mitigating against risk associated with any structural ambiguity.

Utilizing PGS' wavelet shift tomography, hyperTomo®, we adapt the standard model building flow to create metrics that inform on the uncertainty in a final model. The first phase determines the sensitivity of a model to the data, and the ability of the inversion to recover a perturbed equivalent of the final model in both space and magnitude. Once these are determined, the second phase comprises the construction of a large model population that is created by randomly perturbing the final model. The requirements of the perturbation are that the inverted results have a similar and appropriate constraint; equivalent gather flatness.

Having created a large model population (of the order of 100 models), PGS invert for and migrate to generate a population of imaged stacks and gathers. From this, and alongside existing deliverables, a new set of products is created. These additional deliverables provide information on the spatial reliability of the final image based on the experiment of using a large number of randomly perturbed models, all of which exhibit the same moveout criteria. A statistical analysis across the total population of inverted models is performed for each grid location to reveal the mean, variance and standard deviation of the local inverted velocity (as shown below). 3D volumes are computed for all three statistical parameters.

A spatial reliability indicator is also created to give a positional error envelope for the data as illustrated with the error envelope on the target reflector below.

An example of the integrated use of these metrics is presented in the image below. The model population variance cube generated with the new model uncertainty workflow is superimposed with the underlying 3D seismic image and the error envelope analysis. The combination of these additional deliverables provides interpreters with important information as to the local reliability of the seismic image that they are seeking to extract reservoir information from. Additional information about the local illumination strength, for example, can be added to highlight any possible correlations between poor illumination and high model uncertainty.

The additional products PGS’ model uncertainty workflow generates can be used in conjunction with delivered seismic images to assist in mitigating risk associated with uncertainty in target positioning and volumetrics.