Marine seismic data contains two unwanted sea-surface reflections, a receiver ghost, and a separate source ghost. The GeoSource® time and depth distributed source uses sub-sources at varied depths and fired with specific time delays. The ghost functions of the sub-sources are complementary and when combined restore the full signal bandwidth.

GeoSource produces a signal that is distributed in both time and depth. The source array is divided into sub-sources, and each sub-source can be deployed at a specific depth and fired with specific firing time delays.

GeoSource can be fired with the same shot efficiency and density as a conventional source. Geometry is key in processing the data. This includes separating the wavefields emitted by the sub-sources, then re-combining them in such a way that the source ghost is removed.

Known firing time delays can be used to separate the wavefields. The sub-sources fire in nearly the same locations, which is beneficial in this process. Source ghost removal and re-combining the wavefields improves the accuracy of the end results, since any residual energy is greatly suppressed.

With sub-sources deployed at different depths, the source ghost can be removed through a weighted summation of the emitted wavefields. A method for doing this is described in Posthumus (1993) and the process is schematically illustrated below.

The source ghost removal process with sub-sources deployed at different depths is very robust, provided that the depths are chosen such that the ghost functions are complementary. 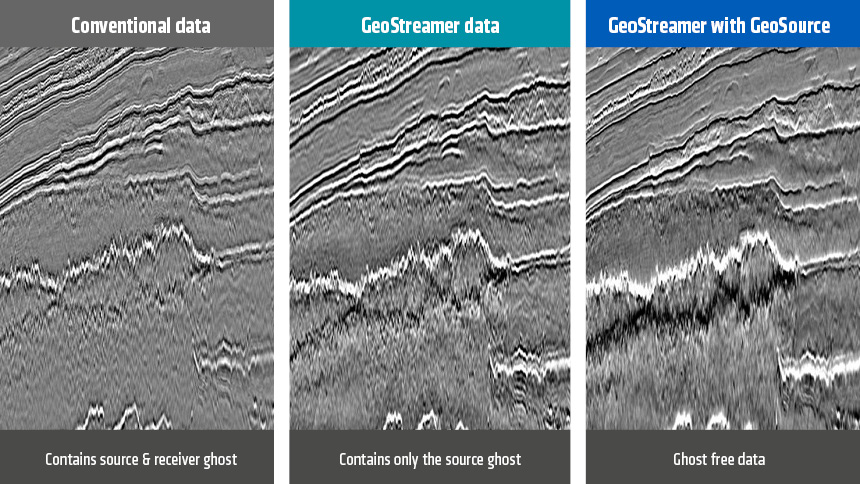