This novel method is currently under development in PGS’ R&D unit and involves the continuous recording of seismic data for as long as it takes to acquire the sail lines. The sources are also operated continuously and the field trial confirms the potential benefits of recording of continuous source and receiver wavefields including reduced environmental impact, improved efficiency and better data quality. eSeismic development is funded by The Research Council of Norway, Equinor and PGS. 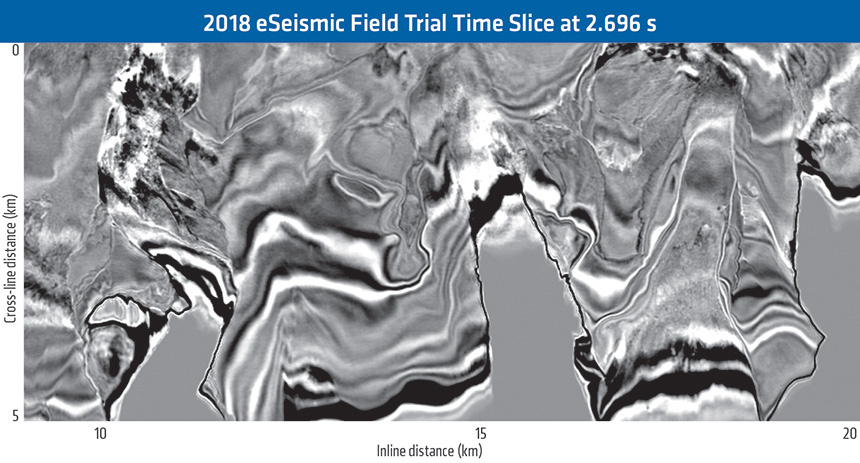 To use the method with existing equipment, individual air-guns are triggered in a near-continuous fashion with short randomized time intervals to generate a continuous wavefield. The emitted signals approach the properties of white noise making it possible to deconvolve the data with the total source wavefield.

The recent small-scale eSeismic trial survey was acquired with 16 x 8 100 m long multicomponent streamers with 100 m streamer separation. A constant streamer tow depth of 15 m was used. The source set-up consisted of six sub-arrays with air-guns and each sub-array was equipped with six air-guns. Individual air-guns were triggered with a mean interval between consecutive triggerings of several shots a second. The nominal separation between the sub-arrays of air-guns was 16.67 m. Since the source deconvolution using the proposed method can solve for one point source per sub-array of air-guns, so six point sources in the cross-line direction, the nominal cross-line bin size for this survey is 8.33 m. In the inline direction the receiver gathers have a trace spacing of 12.5 m. For comparison, a conventional dual-source acquisition with the same streamer geometry would deliver a cross-line bin size of 25 m.

Dense cross-line CMP spacing is achieved without compromising the acquisition efficiency. The 800 m wide sail-line is sampled with 96 common mid points compared to 32 with a standard dual-source configuration. The bin size of the 3D migrated volume is 12.5 x 12.5 m.

From an efficiency standpoint, there are minimal vessel speed limitations since this method does not require the seismic recording or the sources to be triggered with specific spatial intervals. Limitations imposed by shot cycle time and record length are now relaxed.

In addition to continuous seismic recording, near-field hydrophone data needs to be recorded continuously in order to be able to determine the wavefield emitted by the individual source elements.

eSeismic (right) can provide a hexa-source setup and yields increased resolution in the shallow without loss of penetration compared to data acquired with a dual-source setup (left). This is achieved with significantly reduced values of sound pressure and sound exposure levels.