New data provides applicants with the best chance of success in the Danish 8th licensing round. PGS has finalized the processing of 7 600 sq. km of modern, multi-sensor, broadband, towed-streamer seismic data. The data is now available in time for the round.

As the industry collectively recovers from a three-year drought and the market outlook is more optimistic, the announcement of the 8th Danish licensing round is highly anticipated. The round will have a six-month application deadline with awards expected within six months. The newly processed 7 600 sq. km of modern multisensor broadband towed-streamer seismic data is incorporated into a unified prestack depth Central Graben GeoStreamer PURE volume which now exceeds 18 000 sq. km. The Central Graben dataset provides multisensor data of unmatched quality offshore Denmark. Plays can be assessed from a regional perspective right down to the reservoir detail with the same dataset.

There are many geological targets in the area. The main petroleum system is characterized by Middle to Late Jurassic source rock and individual Jurassic fluvial-deltaic to shallow marine sandstones, plus Late Cretaceous to Paleocene chalk and sandstones, sealed by intra-Jurassic to Paleocene claystones.

Chalk studies conducted in UK and Norway reveal obvious similarities with potential plays in the Danish offshore areas. Lessons learned from seismic reservoir characterization studies using elastic attributes, can be replicated for these Danish chalk analogs. The reliable attributes provided by broadband GeoStreamer data enables careful rock physics analysis and calibration at wells. Utilizing broadband seismic data as input to pre-stack inversion workflows is effective for the reliable differentiation of the intra-chalk layering away from the wells. This is important in order to understand the high porosity chalk observed at established hydrocarbon discoveries and fields. The rock physics results demonstrate that broadband seismic data with robust elastic attributes can distinguish hydrocarbon-filled porous chalk from water-wet anomalies in Denmark too.

The new dataset generated considerable interest with our geologists as significant parallels could be made to similar observations on the East Shetland Platform. Untested basins of Paleozoic age on the Ringkøbing-Fyn-High were mapped and range in ages from Devonian to Permian. Interpretations of the GeoStreamer data enabled a better understanding of these basins on older seismic data. Rock physics studies were conducted on wells penetrating Permian and Devonian reservoir sections and the results were combined with quantitative interpretation workflows to extract elastic rock properties. The results are very encouraging with porosities of up to 28% observed in the Permian reservoirs and 12%-15% in the Devonian reservoir. Confident predictions of high porosity reservoirs away from wells is possible by using acoustic impedance volumes from the broadband data. Soft kicks and gas chimneys observed close to or above these sub-basins suggest a working source rock and further supports the idea of a working hydrocarbon system. The discovery of this new play is attributed to the superior resolution and the reliable attributes of the modern broadband seismic data.

The 18 000 sq. km of high-quality GeoStreamer 3D data in the Central Graben area reveals plenty of potential waiting to be explored in this area. Key fields are Ula, Gyda, Ekofisk, Eldfisk, and Valhall, with discoveries: King Lear, and Mjølner. The latest advanced imaging routines have been applied to target the Paleocene and Cretaceous chalk, middle to late Jurassic, as well as the Permian and Triassic. Permian eolian sands are particularly well imaged by a workflow that has included anisotropic velocity model building, Kirchhoff depth migration and PGS Complete Wavefield Imaging (CWI).

The GeoStreamer PURE products are valuable throughout the exploration cycle, from regional exploration to site survey to detailed reservoir studies and as a solid base for 4D. 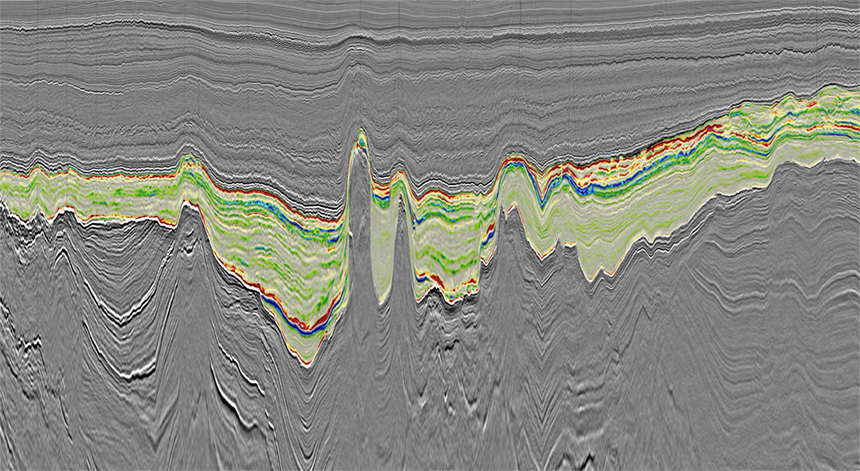