Horizon interpretation has been completed on the CDI MegaSurvey providing an unprecedented opportunity to understand the regional distribution and extensive potential of the turbiditic sandstones offshore Côte d’Ivoire.

Read more about prospectivity in the area in our GEO ExPro foldout. 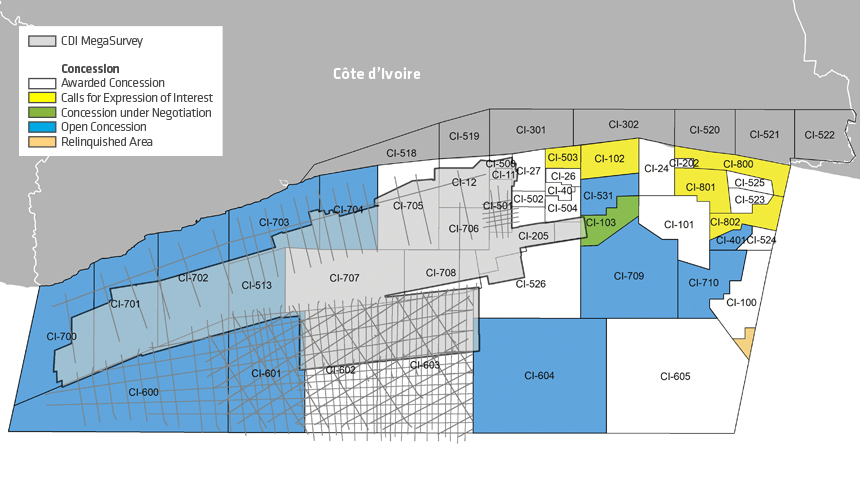 The PGS Côte d’Ivoire MegaSurvey now allows exploration and detailed regional evaluation for the first time, making it possible to effectively assess and derisk the plays.

MegaSurveys are regional scale, merged post-stack datasets and are unique to PGS. They consist of multiple surveys that have been rebinned to a common grid and then matched to produce a phase-balanced and uniformly scaled contiguous regional volume.

The MegaSurvey concept allows the entire Ivorian Transform Margin to be analyzed in a regional context. The contiguous dataset covers both existing discoveries and open blocks available for licensing and enables exploration for analogs, the identification of new prospects and detailed play analysis across the basin.

The Côte d’Ivoire MegaSurvey delineates sedimentary features that have been tested to the east and allows further exploration to the west. Five key regional horizons have been tied to wells and interpreted across the dataset allowing field-scale geological understanding to be placed into a basin-wide context and open acreage opportunities to be assessed with confidence.

Play types confirmed by recent exploration activity in the western Ivorian basin include derisked syn-transform structures and Late Cretaceous channel and fan systems from shallow shelf to slope and deepwater.

RMS amplitudes extracted through an interval of Cretaceous turbidite deposits can clearly delineate the drilled channel systems to the east of the MegaSurvey and highlight that sediments were also sourced from the west. The interpretation of the Base Senonian horizon as part of the MegaSurvey package reveals well-developed submarine fan lobes which could be a potential reservoir.

The basin-wide understanding provided by MegaSurvey seismic data allows for reliable regional depositional models to be built both spatially and temporally through geological time, allowing for the best potential targets to be identified for future exploration.