The rejuvenated Santos Vision regional dataset is ideal for presalt exploration in Brazil. This new product covers an area of 35 000 sq. km and has been reprocessed with our most advanced imaging solutions, including least-squares, RTM, and Q-Kirchhoff.

Deeper and detailed regional geological understanding forms the prerequisite for more successful exploration for oil and gas, and this is especially true for world-class producing basins such as the Santos Basin, offshore Brazil. To support our customers in their continued interest in one of the world’s most prolific petroleum systems, PGS is pleased to introduce the Santos Vision product.

Reprocessing efforts have been specifically aimed at optimizing the potential pre-salt targets. These have included the use of advanced broadband anisotropic velocity model building and imaging technologies such as PGS Full Waveform Inversion (FWI) and Reverse Time Migration (RTM). The systematic use of True Amplitude and Angle Domain Gathers has facilitated iterative model updates and salt scenario testing and resulted in very detailed and accurate velocity models. The final image volumes were generated using both RTM and PGS WEI (least-squares imaging).

The Santos Basin has seen oil and gas production since the 1970s and remains active as new technology and play concepts reveal more potential than was ever originally envisioned. The pre-salt play fairway offshore Brazil has become the focus for many companies. Proven reservoir potential is associated with the micro-biolite and coquinas structures which have been confirmed to contain large hydrocarbon accumulations. The recent opening of this play fairway to unitization and bid rounds has resulted in increased interest in the basin and further highlights the need for a much more detailed structural understanding which the Santos Vision dataset provides. 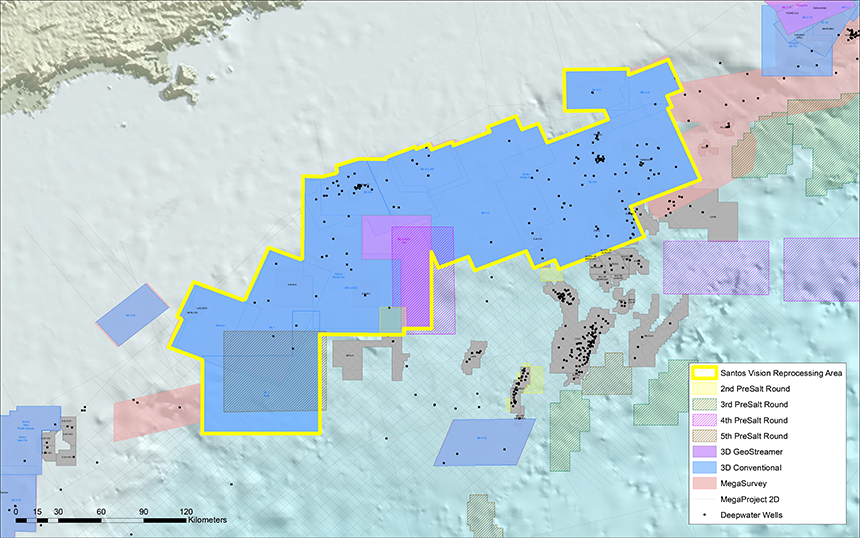