There has been an increase in activity in recent years to reformulate FWI algorithms to deliver deep velocity model updates in a stable manner without relying on very long offsets. The PGS Full Waveform Inversion (FWI) solution uses diving waves, refractions and reflections together to achieve this without artifacts or cycle skipping problems. This enables better inversions for robust ranking and more reliable derisking of prospects.

Although well established as part of the velocity model building flow, most successful applications of FWI to date have been limited to shallow water environments. This can be attributed to the fact that typical implementations rely heavily on refracted energy or diving waves. Put this together with the offset limitations that exist in seismic data, streamers and nodes alike, it follows naturally that shallow settings lend themselves easiest to being addressed by FWI as they are better sampled by refractions. FWI inverts for the velocity model by solving a nonlinear inverse problem minimizing the difference between modeled data and recorded field data. The matching is quantified by the residuals of a least-squares objective function, and the model update is computed as a scaled representation of its gradient.

To move beyond the typical limitations outlined above, PGS has reformulated their FWI algorithms to include reflected energy to retrieve long-wavelength updates. The fundamental idea is to compute a gradient in which undesired reflectivity i.e. migration isochrons are eliminated, and the full wavefield can be used in FWI to produce high-resolution velocity models that accurately predict refractions and reflections. This is a key step when using these velocity models for depth migration and imaging.

PGS FWI separates the low from the high wavenumber components in the gradient so that long wavelength velocity updates are delivered at depths greater than the penetration depth of the diving waves. In our implementation of FWI, these improvements to the physics of FWI are complemented by the introduction of new and robust regularizations schemes to stabilize the solution to the inversion step, i.e. improving the mathematics of the implementation.

Looks Can Be Deceptive

The figure below compares the results of a velocity model derived using a more traditional implementation of FWI (upper) versus the new PGS implementation (lower). The difference is remarkable. Whilst it is inviting to view the upper result as containing spectacular resolution, and thereby 'fit for direct interpretation' in the manner wherein reflectivity seismic images are interpreted, nothing could be further from the truth. Most of the high wavenumber detail in the upper velocity model update is false, artifacts of the migration isochron problem. The lower velocity model update is the correct representation of the geology in this location. 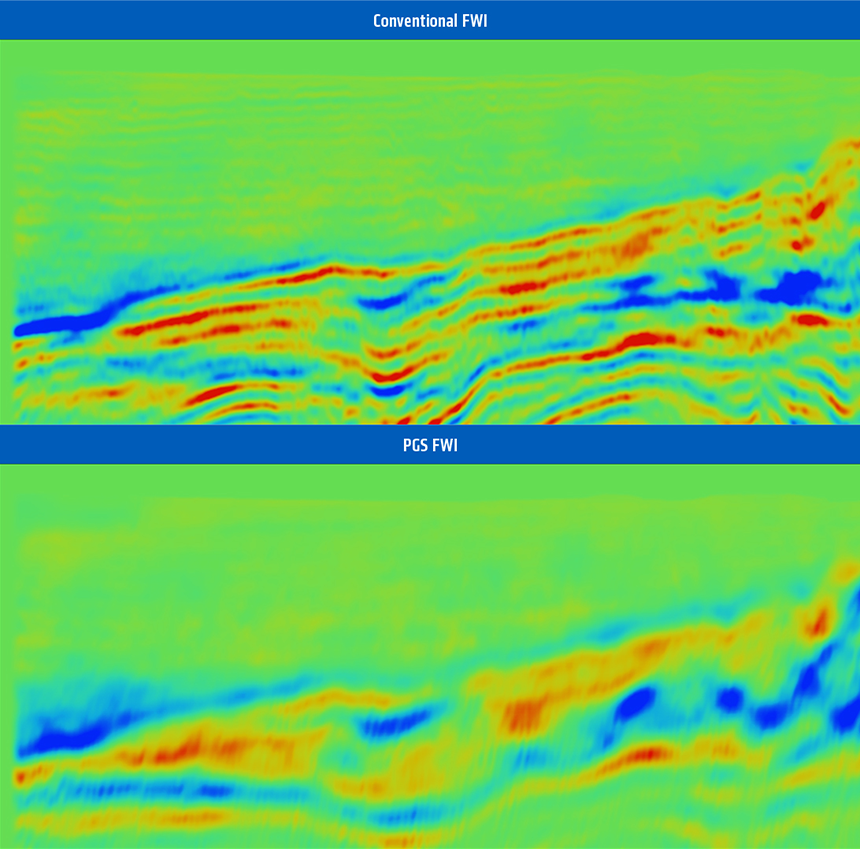 In short, our new velocity model building solutions are able to provide high-resolution velocity models from records containing diving waves and reflections without the migration imprint caused by conventional FWI.

Another well-known challenge to FWI is cycle skipping, which also contributes to high wavenumber velocity model artifacts such as those in the upper part of the figure. In addition to the better imaging condition, PGS is also making progress with sophisticated regularization schemes used to elegantly avoid cycle skipping during FWI.

Better Resolution in the Shallow and the Deep

It is also worth noting that reflection FWI does not only contribute high-resolution, deep velocity model updates. Some areas such as those affected by seafloor rugosity or very shallow geological heterogeneities may derive more benefit to shallow velocity model building using reflections rather than diving waves and refractions.