PGS’ innovative solutions have greatly uplifted velocity model workflows and seismic imaging in the Barents Sea to improve understanding of the geology and hydrocarbon potential of the area.

The southwestern Barents Sea is characterized by a complex geological regime with a heterogeneous overburden and different target depths. The combination of relatively shallow water depths and a hard, rugose seafloor, creates a tremendous amount of noise which has traditionally prevented the recording of near offset reflection data for the shallowest sediments in the southwestern Barents Sea. It is therefore not surprising that the presence of shallow hydrocarbons in this area has only recently been revealed thanks to imaging techniques that use the energy from sea-surface reflections to provide the missing near angle information for reliable AVO/AVA analysis.

A key challenge in producing an accurate image of the Barents Sea subsurface is creating a reliable velocity model that accounts for the area’s complex geological regime and overall hard seabed. PGS’ solution includes near-offsets and advanced velocity model workflows for the Barents Sea to resolve shallow targets affected by absorption effects, and to improve pre-stack amplitude analysis in the shallow water context.

On the Troms-Finnmark Fault Complex, for example, large horst blocks that hold potential for trapping hydrocarbons are masked by shallow gas clouds in the overburden. The imaging challenge is associated with high levels of the seismic energy being absorbed, leading to loss of the higher frequencies. This has meant the internal stratigraphy is difficult to map clearly with conventional Kirchoff migration.

Acquisition in the dip direction to the major fault trends, alongside PGS’ long-offset configuration, enables rays to dive underneath the highly attenuating shallow gas that is present in the area and maximizes energy penetrating through to these horst blocks. Processing the data with PGS’ CWI workflow (a combination of reflection tomography, full waveform inversion, and separated wavefield imaging), using the up- and down-going wavefield recorded by the multicomponent streamers improves resolution and illumination especially for shallow sections. The slider below demonstrates preliminary advanced processing capability to extract energy within horst blocks. 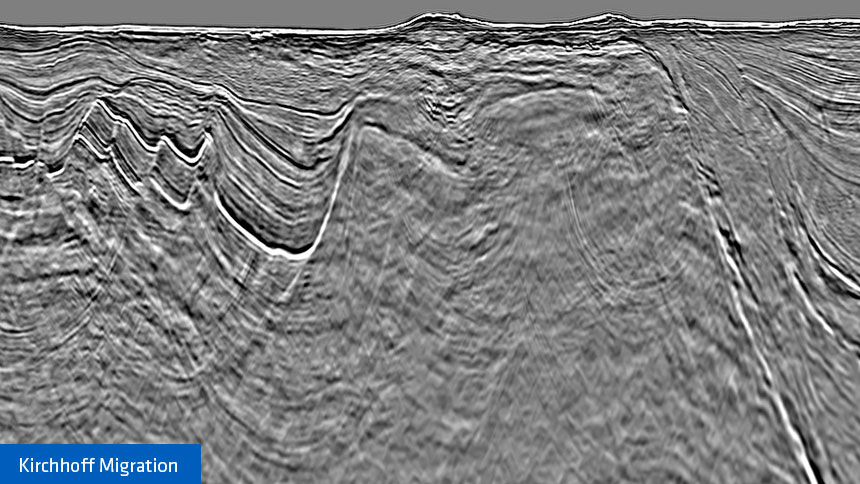 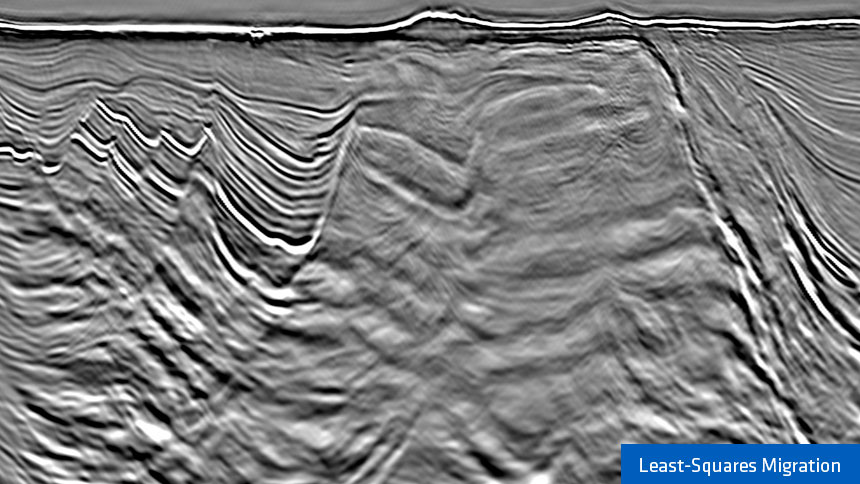 The least-squares migration (LSM) (right) shows clear uplift of internal stratigraphy within the horst block compared with the Kirchhoff migrated data (left). The application of PGS LSM results in a more stable reflector package within the horst blocks which can be correlated across the structures.

The CWI workflow is designed for accurate velocity model building and high-resolution depth imaging. It is particularly suited to areas with a complex geological overburden to accurately depict the subsurface without compromising the integrity of the dataset.

As demonstrated by the PGS’ ultra-high density 3D seismic dataset around the Goliat oil field, FWI velocity updates at the reservoir level show clear indications of low-velocity anomalies and potential prospectivity, particularly when comparing the Goliat oil field outline with a velocity attribute map extracted around the Top Realgrunnen level (image below). The details and large velocity contrasts captured in the depth velocity model allow accurate imaging of the subsurface without being biased by distortion effects caused by the shallow heterogeneous overburden. Both the velocities and the resulting images provide further insights into the reservoir.

The figure below highlights a section around Top Realgrunnen at a depth of around 2.5 km. Within each fault block, low-velocity zones are present at the top of the structure. These anomalous velocities correlate well with the seismic amplitude brightening (soft impedance) and highlight areas of potential hydrocarbon fluid accumulation at the structural highs, and therefore potential prospectivity.