Since the launch of GeoStreamer in 2007, PGS has completed a fleet-wide rollout of this revolutionary multisensor solution. A host of new acquisition and processing capabilities have evolved to utilize this unique marine seismic technology platform.

The introduction of GeoStreamer, in 2007, triggered a demand for broader bandwidth seismic data and awareness of its geophysical benefits for both frontier exploration and reservoir monitoring. It resulted in the rapid development of new acquisition and processing technology, for sources and receivers, plus changes to seismic vessel design and equipment. Today, broadband benefits and a deghosting methodology using up- and down-going wavefields are routinely exploited throughout the seismic value chain, including imaging and reservoir characterization.

Today, petroleum geoscientists must detect and properly image increasingly complex reservoirs by resolving the fine detail of ever-smaller hydrocarbon accumulations. High-quality seismic data plays a key role in efforts to reduce overall E&P risk. Critically, we need to enable the identification and delineation of leads and prospects based on pre-stack seismic data and to quantify key reservoir properties, to successfully separate lithology-fluid facies.

It is well understood that data richer in both low and high-frequency information provides optimal input for improved reservoir delineation and high-resolution imaging; and that improvements in the signal-to-noise ratio of the recorded data could be made by towing the seismic equipment deeper.

Traditionally, streamer tow depths have been limited to between 7 and 10 m to avoid attenuation of high-frequency content by the so-called ghosting effect. Ghost notches are created when a range of frequencies are attenuated through destructive interference between seismic energy directly reflected from the subsurface and ghost reflections of the same energy reflected at the sea surface, directly above the source or receiver equipment.

GeoStreamer technology has overcome the fundamental receiver-ghost problem, increasing the seismic bandwidth and providing better resolution for interpretation. As the ghost can be robustly and accurately removed, the receivers can be towed deeper, thereby improving the signal-to-noise ratio, especially at the low-frequency end of the seismic bandwidth. This improved low-frequency content enhances the quality and accuracy of seismic inversion and reservoir characterization.

Increasing the tow depth has reduced the significance of swell noise created by surface wave action, and made it possible to acquire seismic data in weather conditions that would have stopped traditional shallow-tow surveys. However, although high-quality data can now be recorded in more marginal weather conditions, operational safety and crew wellbeing remain a priority.

All this was incorporated in the design of the latest Titan-class Ramform vessels. The stern was widened from 40 to 70m, allowing up to 24 streamers to be towed simultaneously and minimizing wave-induced tug noise. Larger deflectors enable spread widths up to 1700m, permitting 18 streamers to be towed at a 100m separation. The Titan class Ramform has two workboats in cradles located at the stern, where wave motion is smallest, enabling safe deployment and retrieval with minimum human and equipment risk.

Operational efficiency clearly also benefits from the greater size of the Titan class. The increased space and the comfort that comes with it have benefits for teamwork and interaction. Working offshore becomes safer and less stressful.

Ramform Atlas towing 16 streamers in the North Sea. The wide backdeck allows safe and efficient deployment and retrieval. Note also the area of relative calm behind the vessel, where the workboats can be deployed

While deeper tow enables the recording of more low-frequency signal energy, it can increase operational complexity. Increasing and maintaining streamer depth in a 3D spread is challenging. Deeper front ends typically require additional downward forces and create higher drag. However, GeoStreamer equipment has no theoretical requirement to tow the streamer flat. The deghosting process is geophysically robust even with cable depth variations (uncontrolled or controlled). Streamer depth profiles can therefore optimize seismic data quality without sacrificing acquisition efficiency. This means a nominal streamer depth of 25 to 30 m can be combined with shallow front-ends to minimize drag.

Modern depth steering devices enable rapid adjustment of tow depths during ongoing GeoStreamer surveys with no negative impact on data quality, and without complicating subsequent signal processing and imaging procedures. Tow depth can be adjusted to reduce noise from swell, or barnacle growth, to avoid shallow obstacles like pipelines and fishing traps, or to adapt to local currents and thermoclines.

Demonstration of GeoStreamer’s 4D pre-stack and post-stack compliance was an important milestone for the industrialization of the technology. The full 4D backward compatibility of the system and other fundamental benefits were validated in a field trial already in 2009.

By late 2015, seventeen GeoStreamer baseline and monitor surveys had been acquired. With time-lapse, reservoir characterization, and high-resolution imaging objectives in mind, all of these 4D acquisition projects made use of deep tow, high-density spreads. Most were acquired with 50m streamer separation and with up to 16 streamers.

Historically, manual cleaning and scraping was the only effective measure to address these problems. Automated in-sea streamer cleaning units (SCU) have since been engineered that enable continuous proactive barnacle mitigation. The units are deployed at the streamer front and retrieved at the tail. The devices are autonomous, powered by the movement of the seawater relative to the streamers, and pass positioning units without human interaction. Cleaning continues during the recording of seismic data.

Streamer fanning is a term used to describe the ability to increase the streamer separation in a marine seismic acquisition spread, progressively from the head to the tail. The resulting streamer spread has a fan-like appearance when viewed from above. Fanning aims to improve and evenly distribute coverage at the far offsets, without compromising seismic data resolution or quality. Ultimately this may increase acquisition efficiency by reducing infill.

One approach to fanning uses lateral steering devices. With the roll-out of integrated bird technology, streamer fanning has become a viable option for most 3D GeoStreamer vessels, and a common mode for MultiClient operations, achieving infill reductions of 3-5%.

In shallow water, illumination holes can appear at swath boundaries on 3D towed streamer surveys, due to a lack of near-offset data. This has various disadvantages: missing near offsets create a footprint in the shallow image, and the flatness of the gathers may hinder quality control of migration velocities. The ability to conduct AVO/AVA studies is limited by the same effect.

It has been demonstrated that virtual-source imaging can be applied to multisensor GeoStreamer data, utilizing energy reflected from sea-surface to provide the missing near-surface information. It is now possible to image the shallow overburden seamlessly, and this is complemented by AVO/AVA analysis facilitated by the virtual source concept. Furthermore, this approach to imaging using separated wavefields (SWIM) can be a driver for acquisition efficiency. Traditional survey-planning considerations to maximize spread width and sail line separation are based on primary reflections only, and may thus be relaxed by taking sea-surface reflected energy into account. 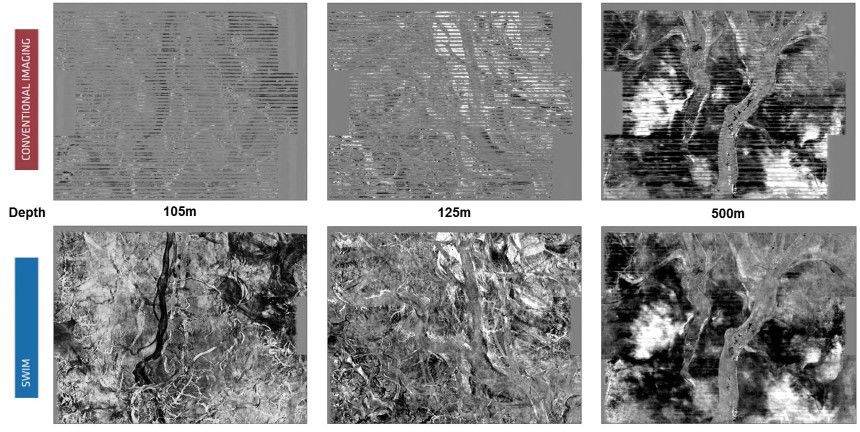 Multisensor GeoStreamer data has been used successfully for pre-stack analysis in a multitude of geological settings, to derive reliable rock physics attributes. These studies have demonstrated that the richer content of pre-stack compliant low-frequency information in GeoStreamer data permits accurate prediction of lithology-fluid distribution, and even porosity, using a robust quantitative interpretation workflow.

Blind-well analysis has demonstrated the accuracy of the rock property prediction, thus establishing the value of GeoStreamer data for derisking leads and prospects through improved reservoir characterization in areas of limited well-control.

The launch of GeoStreamer towed seismic technology was a catalyst for nothing less than a broadband revolution within marine seismic. Its rollout across the PGS fleet has resulted in numerous advances in seismic acquisition methods and operational procedures, offering greater flexibility for seismic survey design and operations. Data quality improvements have been significant and have been successfully combined with similarly significant improvements in safety and efficiency.