New Licensing and Prospectivity in Africa

Offshore licensing and exploration opportunities from Angola to Egypt and throughout the Mediterranean will be discussed by the oil and gas industry in Cape Town, in November.

MultiClient data is a useful tool for licensing applications enabling regional to field-scale prospectivity evaluations. PGS has been supporting Africa's hydrocarbon industry with advanced acquisition and imaging for over two decades. Our extensive MultiClient Africa data library is an essential resource for those seeking new venture opportunities or to understand the mature areas and producing landscape. 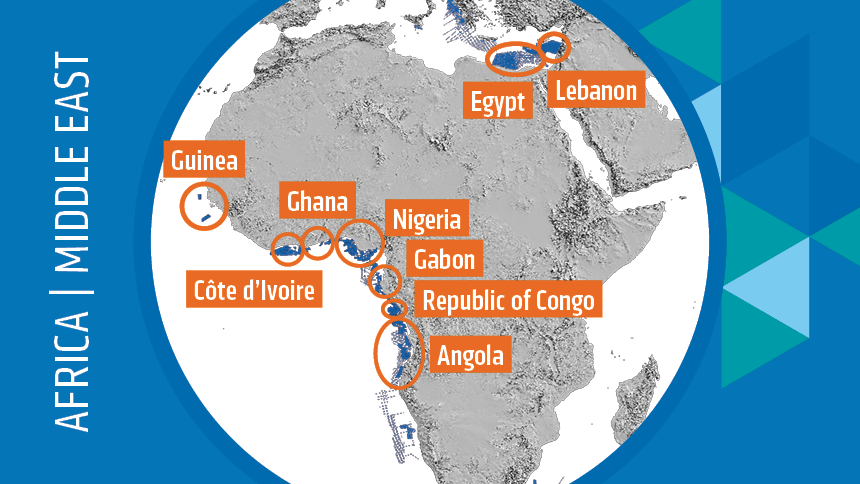 A seven-year program of license rounds was announced in June 2019. Phase one, covering frontier Namibe and Benguela basins, opened in early October and will close in early November. In 2020 Angola will tender onshore Kwanza basin blocks, with offshore shallow water Kwanza Shelf and Lower Congo basin licensing timed for 2021.

PGS data provides a solid foundation to build a regional understanding of the hydrocarbon potential offshore Angola by unraveling and derisking the pre- and postsalt prospectivity. The undrilled Namibe region is covered with 12 000 sq. km of 3D GeoStreamer and 12 000 km 2D GeoStreamer data.

Our latest Kwanza shelf acquisition will provide key data for 2021 bidding, and initial migration data is available for viewing. The combination of 3D GeoStreamer technology with modern imaging techniques is expected to unlock plays in Kwanza basin open shelf blocks 6, 7, and 8.

The 2021 round will include blocks in the Lower Congo basin, also covered by PGS data.

We are awaiting the results of the second phase of Congo licensing, covering shallow-water shelf blocks and remaining open acreage in deeper water. The first phase of License Round awards took place in 2018 and it is anticipated that second phase results will be announced at Africa Oil Week.

Final depth and time migrated seismic volumes are now available for the Congo MegaSurveyPlus. Field data from nine datasets were reprocessed using the latest broadband processing techniques, then matched and seamlessly merged prior to migration. This dataset, from PGS and SNPC, supported bids and work commitments. It can also be used for future exploration in open blocks.

Bid submissions are due in January 2020 for the Republic of Gabon twelfth licensing round. Acreage includes 12 shallow and 23 deepwater blocks. Participants must complete a solid subsurface evaluation, including the purchase of seismic and well data.

PGS regional interpretation and data cover most of the 35 blocks on offer for the licensing round. Data packages support the required technical evaluations and bid applications.

Although no date has been set, growing interest in exploration offshore Africa’s largest oil-producing country has led to an increased likelihood of a new license round.

Imaging integrity has been significantly improved with optimized denoising and full deghosting to improve data bandwidth and signal-to-noise ratio, then a highly effective multiple attenuation and a full-velocity model building sequence, together with depth migration.

Ghana’s first license round closed in May 2019, however it is not too early to consider the next round, due 2020/21, which is anticipated to focus on frontier areas.

A new PGS MegaSurvey covers this extensive prospective offshore area, with 24 000 sq. km of 3D seismic data and 17 000 km of 2D extending from the prolific Tano basin in the west through the Salt Pond basin and into the relatively frontier Keta basin to the east.

MegaSurvey coverage can be used to explore for analogs of existing discoveries or to identify new prospects.

PetroCi and the DGH launched the current licensing round at Africa Oil Week in 2017. Nineteen blocks have been awarded to multiple oil companies.

As part of Africa Oil Week the Ministry of Petroleum, Energy and Renewable Energy (MPEER) of the Republic of Côte d'Ivoire will organize a promotional campaign which will focus on all eighteen open offshore blocks with a special emphasis on five shallow water blocks located on the eastern side of the basin.

PGS has acquired new MultiClient data and built a CDI MegaSurvey that covers most of the remaining open blocks. This enables evaluation of the western Ivorian basin in a regional 3D context, providing an excellent overview of all play types.

New datasets are available over CI-101, CI-205, and CI-706. Advanced multi-azimuth illumination is provided on CI-706, a first for Cote d’Ivoire. It reveals more detail of the syn-rift/transform tectonic system and the migration paths of the post-rift channel and fan systems in the area.

There is a growing interest in the MSGBC basin and, although there is no formal licensing round, the government of Guinea is open to discussion on future exploration.

Fast-track data results are available of our 2019 MultiClient 3D survey in the MSGBC basin, offering a detailed indication of the geological plays in the area. This includes shallow and deep targets within blocks A4 and A5. Full-integrity PSTM results, available in early 2020, are expected to enhance the imaging even further.

The much anticipated offshore Egypt round will extend exploration opportunities in Africa’s most prolific petroleum provinces.

The Mediterranean offshore western Egypt presents 80 000 sq. km of frontier opportunities. The area is bounded to the south by the mature onshore Western Desert basins and to the east by the prolific Nile Delta cone. The PGS data library is an excellent place to start evaluating hydrocarbon potential.

PSDM processing results are now available on our new 22 000 km regional long-offset GeoStreamer 2D dataset. They offer an important link between mature eastern acreage and the western frontier. PGS has 6 000 sq. km of 3D coverage in this area, with an additional 37 500 km of 2D data with well and field ties on around 8 000 km, linking the Nile Delta to the western frontier area. A comprehensive interpretation has been carried out based on a basin modeling study.

Further along the Mediterranean, the Lebanon Petroleum Agency (LPA) announced a licensing round in April that will extend over twelve months. Frontier opportunities are covered by modern 2D and 3D seismic data, in an area with proven hydrocarbon plays, close to recent discoveries.

PGS has the LPA since 2006, with multiple 2D and 3D surveys, and is an official data provider for the second Lebanon offshore licensing round. High-quality seismic data is invaluable for those seeking to unlock the petroleum system and evaluate potential prospects in the Levantine basin.

Meet PGS at Africa Oil Week on stand C40 in the exhibition hall, or contact us on amme.info@pgs.com.

PGS is also supporting the governments of Côte d'Ivoire and the Republic of Congo on dedicated stands at AOW.