Accurate velocity models are essential for understanding hydrocarbon potential but as a ‘start-stop-start-stop’ process, it’s a time-consuming activity. In geologically complex areas most workflows require significant manual intervention and are therefore laborious. Using an automated and repetitive Monte Carlo approach to model building optimizes turnaround while maintaining or improving quality.

Click here to go to our PGS hyperModel product page.

Traditional depth imaging velocity model building (VMB) is usually a top-down approach, run in a ‘start-stop’ fashion. It typically includes the following: first, determine the constraints for the inversion and then run the inversion, before checking the results, conditioning the results, and applying the model. This continues in a ‘rinse and repeat' manner, working down the data until the VMB is complete. In general, model 1 becomes model 2, which becomes model 3, and so on. In practice, models 2a and 2b may have been work that was attempted and discarded before arriving at model 3. It is a highly non-linear and fitful approach, prone to errors because of the single in-out model approach, and heavily dependent on manual intervention. Consequently, VMB can be a slow process, especially in more challenging geological environments.

Monte Carlo simulations use random sampling to solve problems where the solution is not sufficiently defined. When performing an inversion for velocity model building we use observations drawn from the data to infer the values of the true earth model. However, most inversion-based velocity model building methods are under-determined, meaning the solution is non-unique because the observations are insufficient to constrain the inversion to the singular, correct answer. Monte Carlo simulations of the model space accommodate some of these limitations.

The schematic below describes how hyperModel works. The number of models used in the Monte Carlo simulation (Perturbation i) and the number of loops the process uses (n Loops) depends upon the data - both the starting model accuracy (Initial Model M1) and the seismic data quality (Input data). The simplified workflow creates a velocity model in a global sense by minimizing manual intervention, as the protracted ‘start-stop’ of classical model building is replaced by a compute-intensive one determined using optimized and parallelized resources. Limiting manual intervention enables the user to focus on the convergence of the model to a desired result, which is achieved in a much-reduced timeframe by shifting the operation to a compute demanding procedure.

Future developments for hyperModel will include incorporating supervised machine learning approaches to high-grade the observations used to constrain the inversion. A well-taught system should limit noise and multiple-contamination of observations, enabling less pre-conditioning of the input data, further reducing turnaround.

PGS acquired the first two parts of the deepwater Campos Basin data in 2020, using multisensor streamer acquisition, and covering an area of greater than 7 000 sq. km. The over-burden postsalt data is complex, characterized by local basins and a prominent fault regime. There are highly mobile salt bodies overlain with fast and laterally inconsistent carbonate layers. The presalt section is laterally heterogeneous and is heavily faulted.

The PGS hyperModel simulation ran in two parts, initially solving the postsalt section. An automatic horizon tracing algorithm based on waveform genotype segmentation helped pick most of the fast carbonate and top-salt mask. Following a salt flood, the same network determined the base salt, and the Monte Carlo simulation then solved the presalt section. The first image below displays the benign input model and migrated Common Image Gathers (CIGs) from the part one region, and shows areas of significant under- and over-corrected moveout on the CIGs. The output from the model building is shown in the second image. CIGs are flatter and the model is geologically consistent, especially in the presalt section. Model building took less than four weeks, with the hyperModel component taking approximately two weeks.

"By using PGS hyperModel, we have reduced the turnaround time for the super-fast-track, generating a suitable model for depth imaging of an accelerated product, enabling PGS to deliver data to a client in fall 2020, well in advance of Brazil's 17th bidding round in 2021," says PGS Senior Reservoir Geophysicist, Yermek Balabekov. 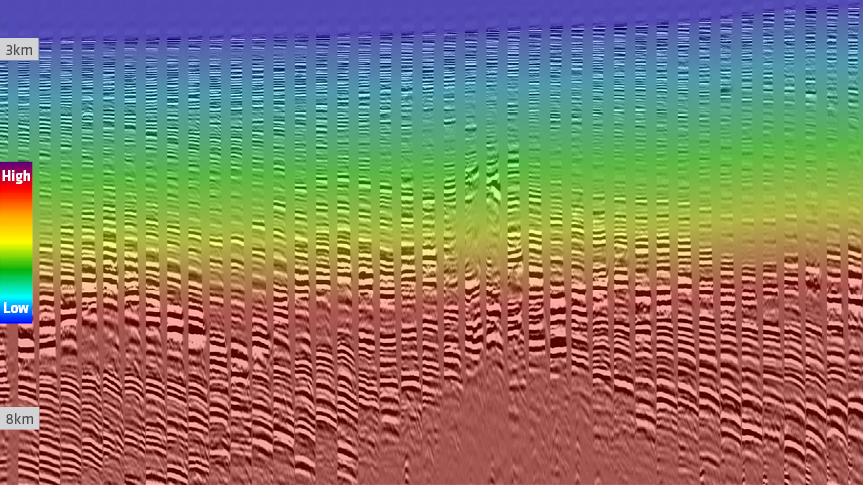 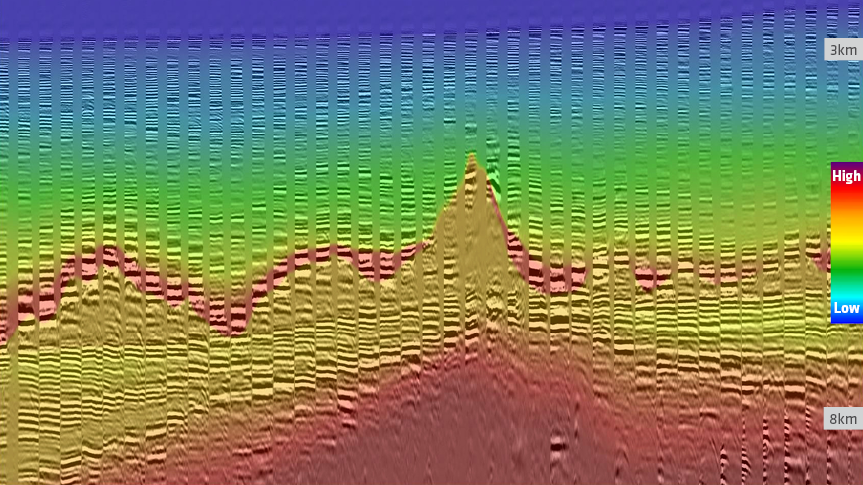 A More Automated Approach Applicable to Wider Use with Fast Turnaround

PGS hyperModel has been successfully used on numerous data volumes, from Asia to the Americas, and in deep- and shallow-water environments. The initial benchmark was run on a volume from Côte D’Ivoire, West Africa. It was compared to a full-integrity velocity model building exercise using conventional ray-based tomography, the goal being to determine if hyperModel could build an equivalent model automatically, and if it could, what benefit in turnaround might there be? The figures below show the results from hyperModel (B and C) compared to the full-integrity approach (A) – they are comparable, however, the full integrity took 12 weeks, whilst hyperModel took less than two weeks, despite starting from the same point. hyperModel also produced an almost identical model when the starting point was significantly in error, again in less than two weeks. 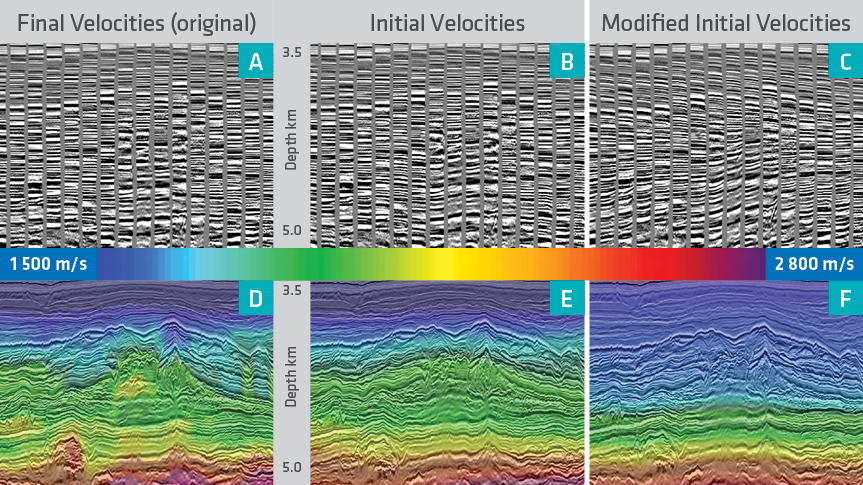 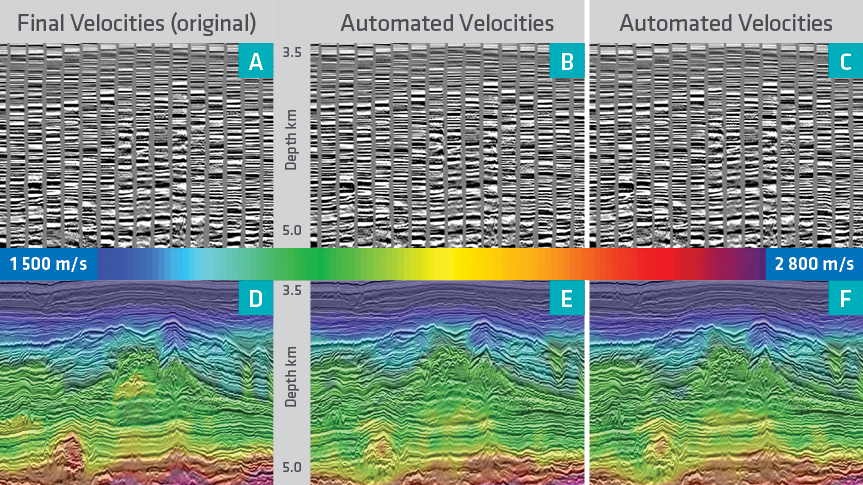 Input and output model for the Campos Basin phase 1 hyperModel work. Note the geological consistency of the model, capturing regional changes in velocity and flattening both post and presalt sequences.

Reducing turnaround is a key objective of PGS and also a goal of the industry. One way to achieve this is to move from manually intensive processes to those that offload the effort to massively parallelized computing. Monte Carlo simulations enable this for velocity model building, while additionally solving some of the challenges of conventional methods with statistics. PGS hyperModel has been shown to work on a variety of datasets, reducing turnaround for model building by more than an order of magnitude.