Current discoveries in the area exhibit elements of both structural and stratigraphic trapping, and the data indicates a number of undrilled analogous features on trend with the established discoveries. The AVO fidelity and compliance delivered by GeoStreamer enables confident derisking of stratigraphic plays and prospects.

Industry attention in the last few years has been directed at the world-class Santos and Campos basin areas on Brazil’s east coast, where Cretaceous carbonate reservoirs in large sub-salt structural traps have proved so prolific. Analogues of this play have subsequently been chased on the conjugate margin equivalents of these basins in West Africa.

Further north, the extrapolation of trends from one side of the Atlantic margin to its conjugate pair has been in the opposite direction: success in post salt Cretaceous reservoirs along the conjugate margin in West Africa, for instance Jubilee, have precipitated a move by explorers to examine the equivalent equatorial margin of Brazil and neighboring Guyana from a new perspective. Zaedyus in French Guiana was an early geologic success and Exxon’s Liza and associated fields in Guyana have become the poster child for economic success in these play fairways on the South America Equatorial Margin.

The Equatorial Margin of Brazil has four potential hydrocarbon sources capable of supporting exploration prospects and play fairways, including the Aptian/Barremian oil-prone source rock that has charged the majority of current production offshore Brazil, and the Albian/Cenomanian/Turonian marine black shales, which are a major source for the oils in the West African salt basins, as well as Late Aptian and Tertiary candidates. Regional shales from the Cretaceous to the Tertiary form effective seals, except where mass-wasting events in the Upper Tertiary may have caused seal failure for younger stratigraphic intervals.

To date, few deepwater exploration wells have been drilled in the Equatorial Margin extending from the Amazonas Cone to the Potiguar Basin. The Ceará and Potiguar basins at the eastern end of the Brazil equatorial margin are two under-explored basins which have both yielded recent exploration successes, indicating working petroleum systems and potential reservoirs.

The Cretaceous reservoir play fairway has been successfully established by two prominent deepwater discoveries, Pitu and Pecem, in the Ceará and Potiguar basins respectively. The 2012 Pecem discovery well in the Ceará Basin, found a 290 m column of oil-bearing sands in the Aptian age Paracuru Formation, while the Pitu discovery well in the Potiguar Basin found a 186 m column of 28 API oil in Alagamar Formation sands of Albian age at depths of 3 690 m to 3 875 m. With quoted 2P reserves of 475 million bbl oil and almost 1 tcf gas, Pitu is currently being appraised.

PGS conducted a succession of MultiClient broadband multicomponent GeoStreamer 3D surveys to enhance exploration understanding and derisk play elements in the Potiguar and Ceará basins. Between 2015 and 2017 almost 20 000 sq. km of 3D GeoStreamer data have been acquired with further expansion of this regional dataset being permitted and scheduled for acquisition in 2019. 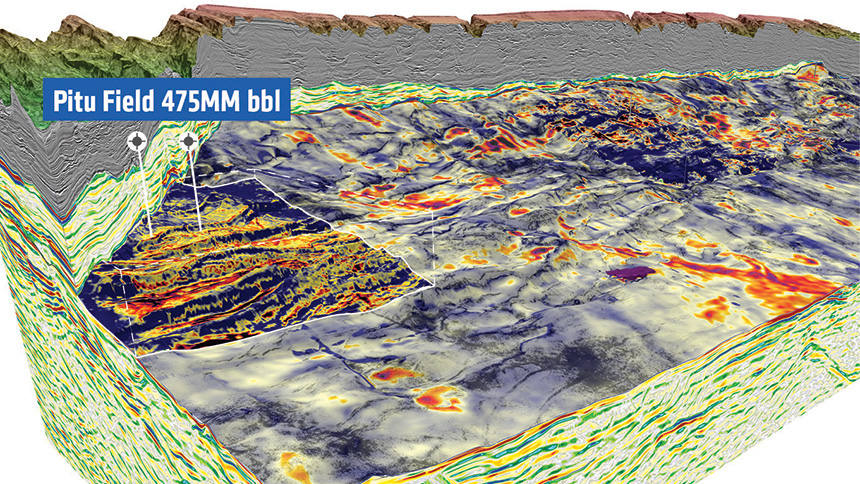