The Namibe Basin represents a globally significant frontier hydrocarbon region located offshore southern Angola. With the recent acquisition a 12,000 sq. km MultiClient 3D GeoStreamer survey there is now a unique opportunity to unravel and de-risk the pre- and post-salt prospectivity of these unlicensed blocks.

PGS geoscientists have conducted studies to understand and mitigate petroleum system risks including structure size, CO2 presence, hydrocarbon charge, and reservoir facies within this undrilled basin. The results of a comprehensive Basin Modelling study, conducted in collaboration with IGI Ltd, predict the burial and maturation history of the pre- and post-salt source rocks and demonstrate hydrocarbon migration to traps.

From a regional understanding of the source rocks of the Angolan and Brazilian margins, those for the Namibe Basin are expected to occur predominantly in the presalt syn-rift (Lower Cuvo equivalent) and sag phase (Bucomazi equivalent) lacustrine sections, with potential for a secondary early post-rift source rock (Iabe equivalent) in the deeper water.

Regional temperature and geochemical information have been taken from well data in Angola and Namibia, and appropriate ranges were selected as input for the modeling of source rocks. The results of this basin modeling work, conducted on pseudo well locations in the Namibe Basin, exhibit encouraging maturation profiles, with the Lower Cuvo Formation equivalent reaching early oil generation in the Eocene and Bucomazi Formation equivalent in the Miocene.

The resolution of this 3D broadband survey has allowed seismic facies to be characterized and delineated with greater confidence in the presalt section. These facies could then be compared to drilled analogs seen in equivalent broadband data in the Kwanza, Santos, Campos and Espirito Santo basins.

In the early syn-rift section equivalents of the Lower Cuvo Formation continental sandstones from Kwanza and the Lower Guaratibe sandstones of Santos can be interpreted, characterized by higher amplitude seismic facies with possible fan-like geometries. Above these, equivalents of the shallow marine sandstones of the Upper Cuvo Formation (Kwanza) and Upper Guaratibe (Santos) also can be delineated.

In the sag-phase section, the seismic resolution allows the description of multiple facies characters and their spatial distribution to be mapped in relation to the rift structures. Depositional facies such as grainstone shoals, microbial buildups, coquinas, and tidal dolomites can be inferred based on matching their seismic reflector amplitude, frequency and continuity characters to equivalent facies in the Kwanza and offshore Brazilian basins.

In the post-rift section, facies distribution is noticeably influenced by salt movement. Grainstone shoals and sand-dominated mass flow deposits can be interpreted with numerous plays provided by salt withdrawal collapse features and ponding of sands in palaeo-lows.

The full basin modeling study and database is now available. 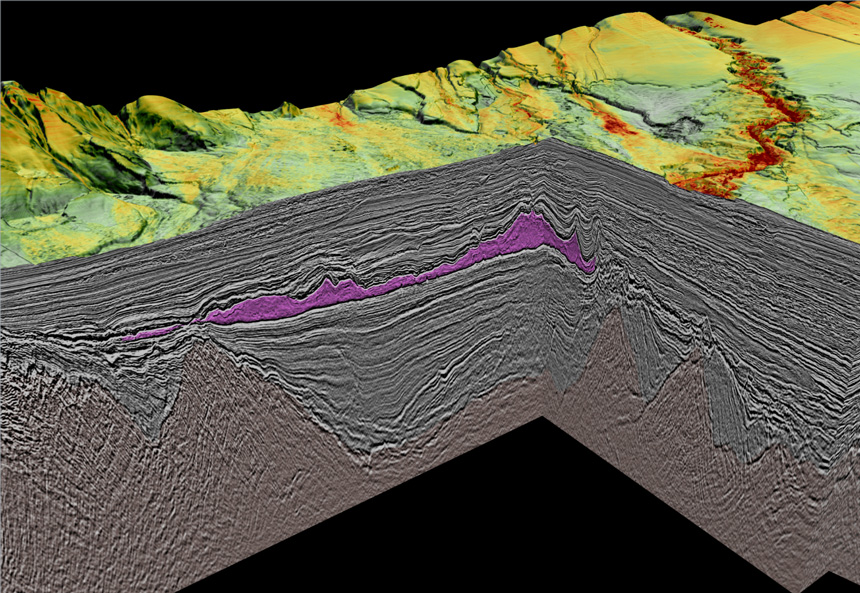