A new solution to LSM is delivering spectacular results in imaging resolution. The improvements are demonstrated on large datasets from the North Sea and the US Gulf of Mexico at #EAGEPARIS2017 this week. This version of LSM clearly offers a better option for big data volumes.

Least Squares Migration (LSM) solutions have historically been limited to computationally expensive adaptations of Reverse Time Migration (RTM), and by necessity run on small data volumes. PGS had developed a new LSM which will be presented at the EAGE 2017 event. It uses a visco-acoustic anisotropic one-way wave-equation operator that can be efficiently applied to large datasets. Spectacular improvements in seismic image resolution and interpretability are demonstrated on 3D data volumes from both the North Sea and the Gulf of Mexico.

Why Use Least Squares Migration?

Conventional depth migration produces a blurred representation of the earth reflectivity, with biased illumination and limited wavenumber content. The image resolution at a given depth is controlled by the migration operators, the acquisition parameters (source signature, frequency bandwidth, acquisition geometry), and the earth properties at the reflector depth and the overburden (velocity, attenuation).

Some of these conditions can be mitigated during acquisition and processing by employing technologies such as dual-sensor data, full-azimuth acquisition geometries, attenuation compensation, and using high-resolution earth models during depth migration (i.e. models derived from Full Waveform Inversion). However, when heterogeneities are present in the earth and the acquisition geometry leads to insufficient source and receiver coverage on the surface, both the illumination and wavenumber content of the depth-migrated images can be significantly restricted.

The resolution of the depth images can be improved by posing the imaging problem in terms of least squares inversion. Least-Squares Migration (LSM) solutions are designed to produce images of the subsurface corrected for wavefield distortions caused by acquisition and propagation effects. They implicitly solve for the earth reflectivity by means of data residual reduction in an iterative fashion, which usually demands intensive computation.

PGS has implemented a new LSM using an accurate visco-acoustic anisotropic one-way wave-equation operator. A one-way operator is integrated with a fast linear inversion solver in an efficient migration/demigration workflow; namely, an implicit Least-Squares one-way Wave-Equation Migration (LS-WEM). The PGS LS-WEM simulates data by wave-equation Born modeling, and iteratively updates the reflectivity by migration of the misfits between the observed and simulated data. Each iteration comprises one Born modeling and one migration.

The computational cost of the iterative LSM relies on the efficiency of the wavefield propagation algorithm. Our implementation of the inversion uses a one-way wave-equation operator that has the advantages of both accuracy and efficiency. Furthermore, our implementation combines the one-way extrapolator with fast linear inversion solvers into an efficient migration-inversion system.

Figure 1 shows the results of applying the PGS LS-WEM to a wide azimuth (WAZ) dataset from the Gulf of Mexico. The results also demonstrate that the PGS LS-WEM can deliver superior images compared to conventional depth migration. The image improvements include reduction of the acquisition footprint, better vertical and horizontal resolution, and improved wavenumber content (Figures 1C, 1D, and 1E]. The PGS LS-WEM also balances the overall imaging amplitudes, and especially augments the deeper reflection targets. More importantly, better images of the fault structures are obtained thanks to the improved wavenumber content. 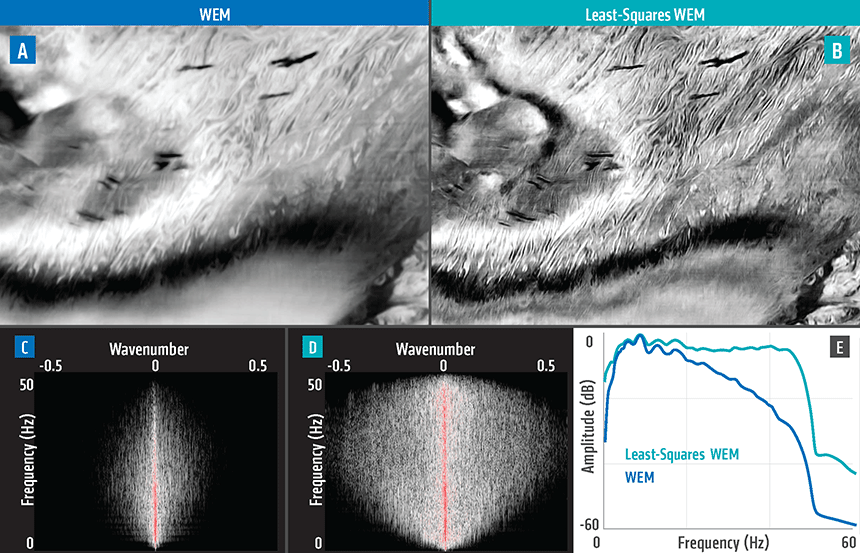