Bringing the Subsurface into Focus with Least-Squares Imaging

New PGS least-squares solutions are emerging that compensate for wavefield distortions and dramatically improve the imaging and the interpretation of complex structures.

Getting a Better Representation of Earth Reflectivity

Despite recent advances in seismic acquisition technology, deghosting, and advanced imaging algorithms, seismic modeling and migration operators still typically produce a blurred representation of the earth reflectivity, with limited resolution and wavenumber content. That is because the image resolution is controlled by the acquisition parameters, the earth properties at the reflector depth, and the overburden (velocity, illumination, and attenuation).

Properly deghosted broadband data is still subject to the heterogeneities in the earth and the spatial limitations of the acquisition geometry, thereby reducing the wavenumber content of the depth-migrated images. Exciting new high-end seismic imaging methods such as least-squares migration (LSM) are addressing these challenges.

The PGS least-squares imaging solutions include options for explicit and implicit inversion. The resultant images have better amplitude fidelity and resolution as they are corrected for the wavefield distortions caused by acquisition and propagation effects.

The principal approaches that can be employed to invert for earth reflectivity from seismic images are both based on least-squares formulations of the imaging problem.

PGS now offers both methods which are discussed in more detail below.

The targeted least-squares imaging method enhances the wavenumber content of depth migrated images by explicitly computing the Point Spread Functions (PSFs) by wave-equation modeling/migration. It solves a linear system using a conjugate gradient solver where the migrated images and the PSF are the known quantities and the reflectivity is the unknown. Results below from a synthetic Sigsbee2A model and a dual-sensor field dataset from the North Sea demonstrate the improvements in wavenumber content from applying a targeted least-squares inversion.

The sedimentary section of the Sisgsbee2A synthetic model is ideal for illustrating the effect of a targeted LSM on image resolution as it has sharp contrast features due to faulting. The figure shows the space-Fourier pairs corresponding to the migration of point scatterers (upper left) and the LSM result that describes the ideal reflectivity (upper right). The inversion result shows better spatial resolution and more balanced amplitudes than the migration result. A close-up view of the space-Fourier pairs at one of the faults (figure below, bottom left and right) shows the improvement in spatial resolution. The wavenumber content (C and F in the figure below) corresponding to the fault and the flat reflector are clearly improved by the inversion.

Depth images: standard one-way migration (left), and targeted least-squares migration (right). The bottom figures show a close-up view of the space-Fourier pairs computed at one of the faults.

The next figure compares conventional Wave Equation Migration (WEM) and the targeted LSM on wide-azimuth (WAZ) data acquired in the Gulf of Mexico. Overall, the inversion shows more balanced amplitudes than the migration, and spectacular improvements are observed in spatial resolution at all depths considered. 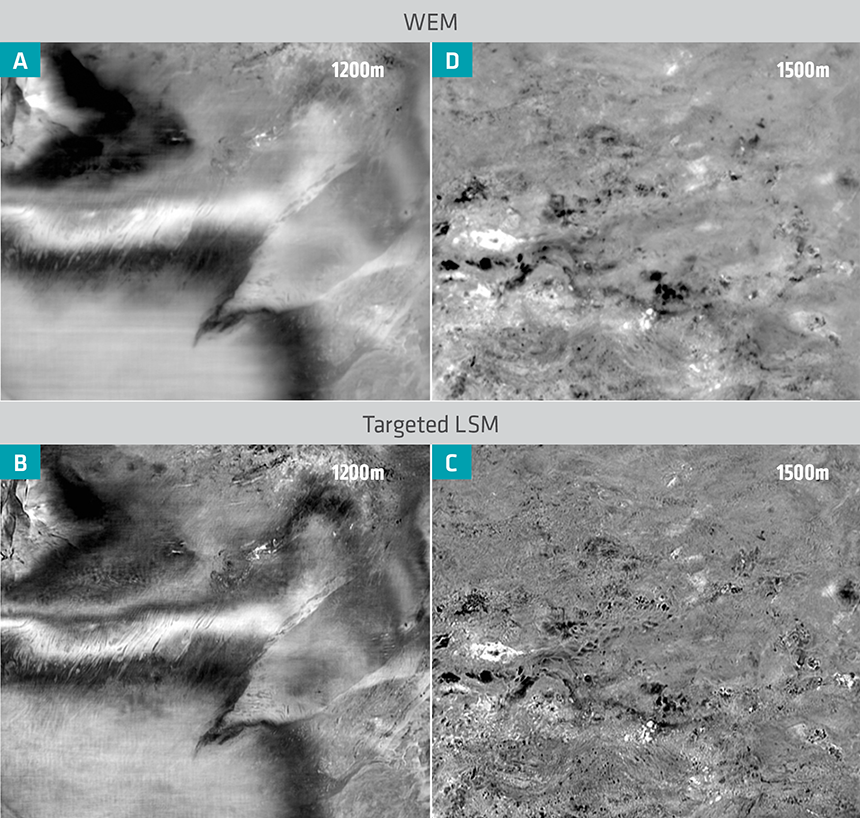 The global iterative LSM algorithm can be summarized by the flow diagram below. The first step in the flow is to produce an approximate reflectivity (migrated image). Next, the estimated reflectivity is used for Born modeling to generate synthetic data. The difference between the predicted and observed data is then migrated to update the image m. The inversion converges when the simulated data matches the recorded data within specified criteria. One inversion iteration consists of one Born modeling step and one migration.

Application of the global iterative LSM to the 2D Sigsbee2b synthetic model is shown in the next figure. Conventional WEM shows uneven illumination throughout both the sedimentary and sub-salt areas, including shadow zones related to the complex salt morphology. In contrast, LSM improves the illumination by balancing the image amplitudes and reducing the effects of the shadow zones (B in the figure). Iterative WEI also enhances temporal resolution by broadening the frequency spectrum (E in the figure). Figures C and D show that LSM balances the wavenumber content, and consequently improves the image of the faults and dipping salt flanks. In addition, it converges rapidly to the true solution, reducing the data residuals by 90% in only four iterations (F in the figure). 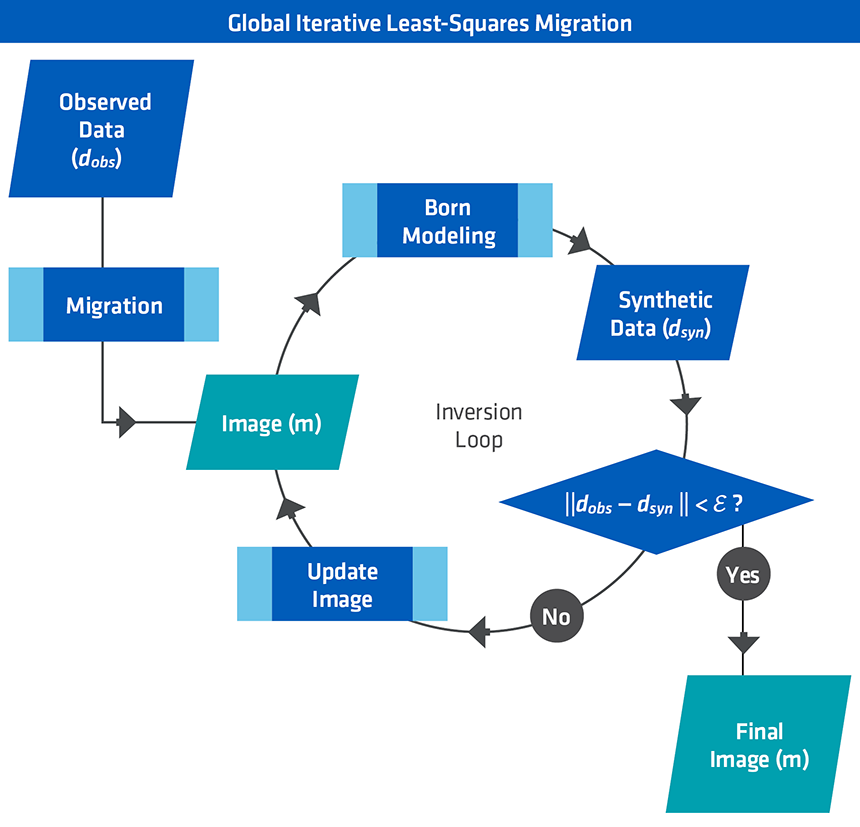 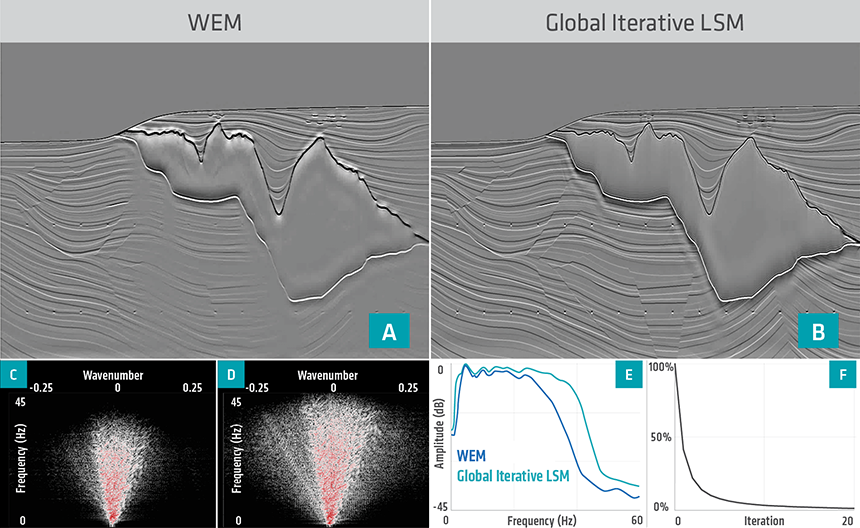 An example of 3D narrow-azimuth (NAZ) data from the North Sea further illustrates the advantages of applying global iterative LSM to strongly attenuating media with a high resolution velocity model. The figure below shows a comparison of the results from WEM and LSM. The standard migration images are corrupted by the acquisition footprint (A in the figure); a typical problem in a shallow water environment. The LSM solution effectively reduces the acquisition footprint, leading to a more interpretable image (E in figure below) with much broader wavenumber content (F in figure below) compared to WEM (B in the figure), and better imaging of the fault planes (circled in the figure H below). 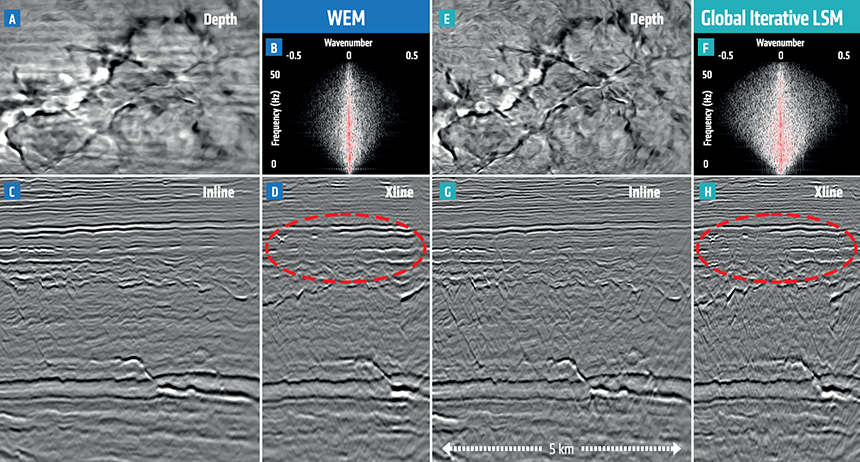 Which version of the PGS LSM solutions is best? In principle, the two methods should yield equivalent results if the matrices are well-posed and the velocity models are perfect, but in the real world there are various factors to consider. Note that both the targeted and global LSM solutions can accommodate VTI/TTI anisotropy, and both can compensate for absorption effects (Q).

Explicit access to the PSFs with the targeted solution allows some direct assessment of spatial resolution, although there are no updates of the reflectivity model once it is initially computed. The method is target-oriented and offers considerable flexibility for cost effective testing.

By contrast, a full update of the reflectivity model is completed during each iteration of global LSM, so that may be a better option for datasets affected by particularly strong and challenging acquisition footprints.

PGS has developed the most flexible and efficient portfolio of least-square migration solutions to correct for wavefield distortions caused by acquisition and propagation effects. The targeted LSM solution is faster and can be focused at local subsets of a survey, whereas the global iterative LSM is theoretically more sophisticated and applicable to the most challenging scenarios.