Integrating EM and GeoStreamer acquisition, inversion, and interpretation provide cost-effective subsurface derisking. With demonstrated production of more than 200 sq. km of 3D EM acquired in a single day, a new standard has been set for EM acquisition efficiency.

PGS developed a towed streamer EM system to operate in water depths up to 500m that can accurately recover sub-surface resistivity down to 3000m below the mud line.

The system can be deployed in deeper water, though signal penetration and sensitivity to resistivity variations in the deeper sub-surface may be reduced.

To confirm its ability to recover sub-surface resistivity in a particular setting accurately, PGS conducted several feasibility studies prior to acquisition. Typically these involve forward modeling of various water depths, target depths, target sizes and resistivity scenarios, followed by inversion of synthetic data from the model. 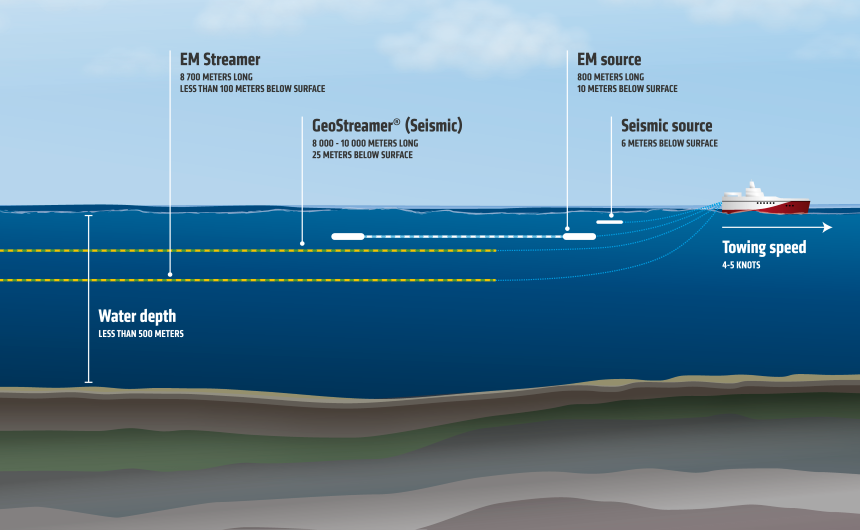 A typical setup for simultaneous towed-streamer EM and GeoStreamer acquisition

Following three annual acquisition programs, PGS has built a growing library of MultiClient EM data in the Barents Sea. The 2013 project was a simultaneous 2D EM and GeoStreamer survey. In 2014 we progressed to a large-scale, high-density 3D EM survey, then a further 3D EM project was acquired simultaneously with 2D seismic in 2015. 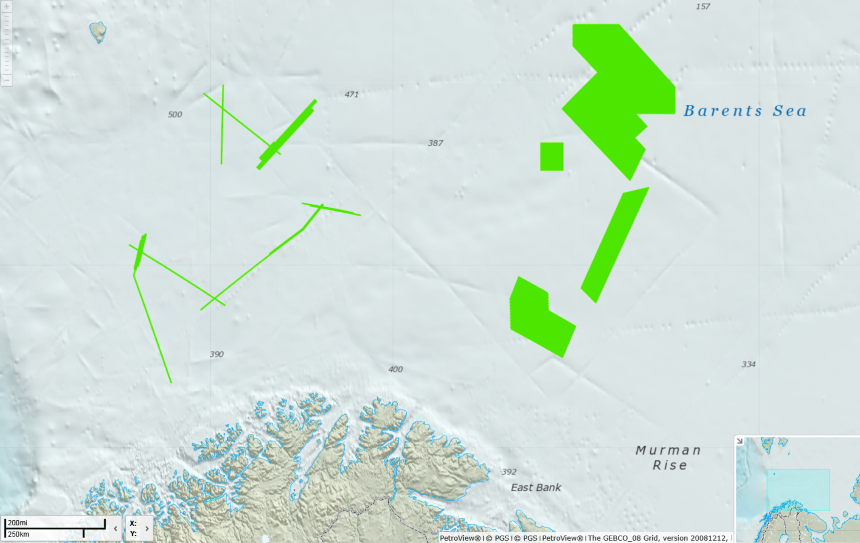 MultiClient 2.5D / 3D data in the Barents Sea – acquired either over, or with GeoStreamer data

Each of these Barents Sea surveys highlights how the technology can be applied in regional, frontier, derisking, as well as nearfield exploration.

An extensive volume of high-density 3D EM data has been acquired. This has been used by clients, in conjunction with seismic, to derisk applications for the 23rd Round.

In 2013, simultaneous acquisition of EM and GeoStreamer data over Caurus and Skrugard clearly illuminated new resistive anomalies close to the known discoveries. These might have been missed if the seismic had been interpreted in isolation.

The 2.5D inversion process starts with a resistivity value assigned to a half-space. In the Barents Sea, this value is typically between 5-20 Ωm. Thanks to the density of the Towed Streamer EM acquisition grid, altering this initial value does not significantly affect the final output of the inversion. Varying the half-space value only really affects the number of iterations the inversion has to run before it reaches the final model. The number of iterations required decreases the closer the initial value is to reality.

By performing an unconstrained inversion of the Towed Streamer EM data to determine sub-surface resistivity, PGS extracts the maximum possible value from the data prior to considering any constraints on the solution.

Unconstrained and seismically guided 2.5D inversions are undertaken by PGS' specialist EM Imaging and Interpretation group in Oslo. If the acquisition line spacing is 1.5 km or less, then the 3D unconstrained inversion can be performed in parallel by TechnoImaging in Salt Lake City, providing an independent QC of the inversion process at an early stage. 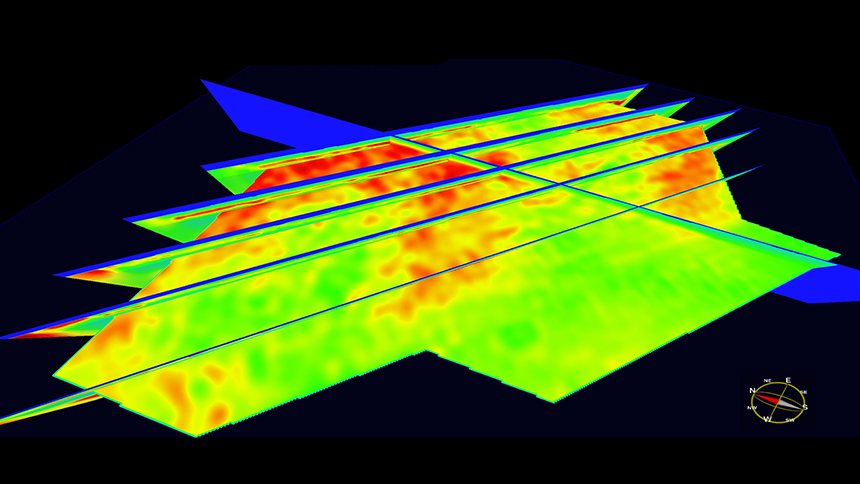 To improve the resolution of the EM data, seismic horizons, or other geophysical data, can be used to guide the inversion. This guiding is softer than traditional, constrained inversion. The inversion is allowed to anticipate a significant change in resistivity at a certain horizon but remains free to populate the cells in the inversion above this horizon in a manner that best fits the model.

Seismically guided anisotropic 2.5D inversion of Towed Streamer EM data significantly improves the lateral and vertical resolution of resistivity anomalies, and by integrating the seismic and EM data we can maximize the value of the complementary coverage.

Example of a seismically guided inversion from the Barents Sea, Towed Streamer EM and GeoStreamer data acquired simultaneously in 2013

Consider an area where a large number of shallow amplitude anomalies are identified on 3D seismic. In the Southern North Sea, these may be associated with potential gas fields. However, the lack of data available to analyze their potential gas saturation levels means ranking these prospects is challenging. This could mean the difference between commerciality and non-commerciality of a field.

With the density of data acquired through a rich range of offsets and frequencies, it has been demonstrated that Towed Streamer EM is sensitive to a vertical resolution of down to one meter in the shallow sub-surface. This means that the technology can be employed to identify, characterize and monitor changes over time in shallow gas in the over-burden of a producing field, significantly reducing drilling hazards.