GeoStreamer data has profoundly and uniquely improved the geological understanding at all depth levels of the Browse Basin, from the very deep Permo-Triassic section to the shallow water bottom.

The Browse Basin offshore Australia is characterized by interlayered carbonates and clastics and has historically been interpreted as a gas play. Signal penetration has been problematic and seismic data from this area has generally been poor. This has prevented a clear assessment of deeper structures with hydrocarbon potential. Techniques relying on the reflection strength of the seismic waves to identify possible oil and gas accumulations, such as amplitude versus offset (AVO), have been unreliable and have resulted in a number of dry wells. Resolving shallow drilling hazards is also difficult.

Key benefits of using GeoStreamer in the survey area 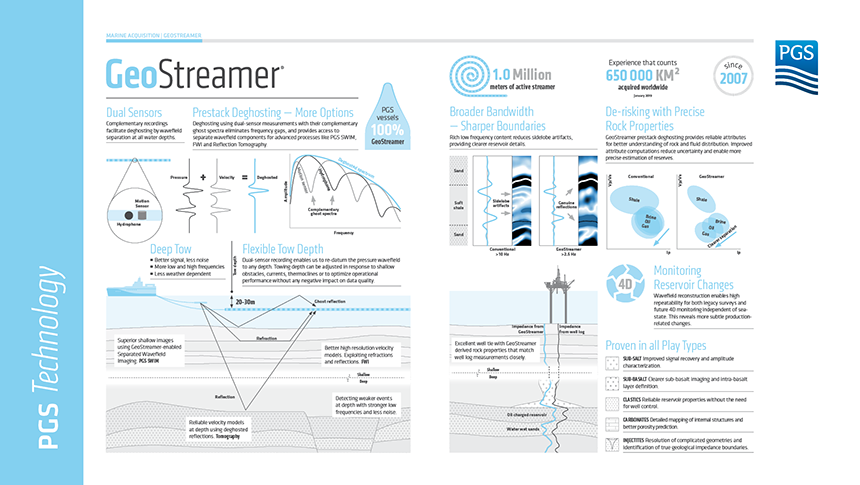 Imaging challenges from top to bottom

The Caswell MC3D survey is the most recent (2013) of three contiguous GeoStreamer 3D surveys acquired in the Browse Basin, as shown on the map below. Exploration activity has focused on the Caswell sub-basin, one of the two major depocenters within the Greater Browse Area, where the Upper Jurassic and Lower Cretaceous formations form the regional seal. The Lower-Middle Jurassic Plover Formation and the Berriasian Brewster Member of the Upper Vulcan Formation are the most laterally extensive reservoirs across the Caswell sub-basin, and these formations were initially targeted during the interpretation of the 2013 GeoStreamer 3D dataset.

Historically, several dry wells have been drilled here on conventional data, with false amplitude anomalies. This demonstrates the challenges for reliable amplitude versus angle (AVA) analysis with most reservoir targets characterized by a very weak and discontinuous amplitude response. This is due to the interplay of multiple lithology types and ultimately affects reservoir quality.

Deep seismic imaging in the area has traditionally been characterized by low signal-to-noise ratios (SNR) and incoherent imaging of the Permo-Triassic section. Low-frequency signal penetration from conventional hydrophone-only surveys has been weak.

Previous drilling efforts are known to have incurred significant losses of circulation fluids associated with highly porous carbonate reef hazards in the (Miocene) near-surface, so the identification of shallow drilling hazards is understandably high profile in this region. Highly reflective shallow carbonate reefs and interlayered carbonates and clastics are either weakly resolved on historical seismic images, or chaotic and impossible to interpret because of low fold and pronounced acquisition footprints. 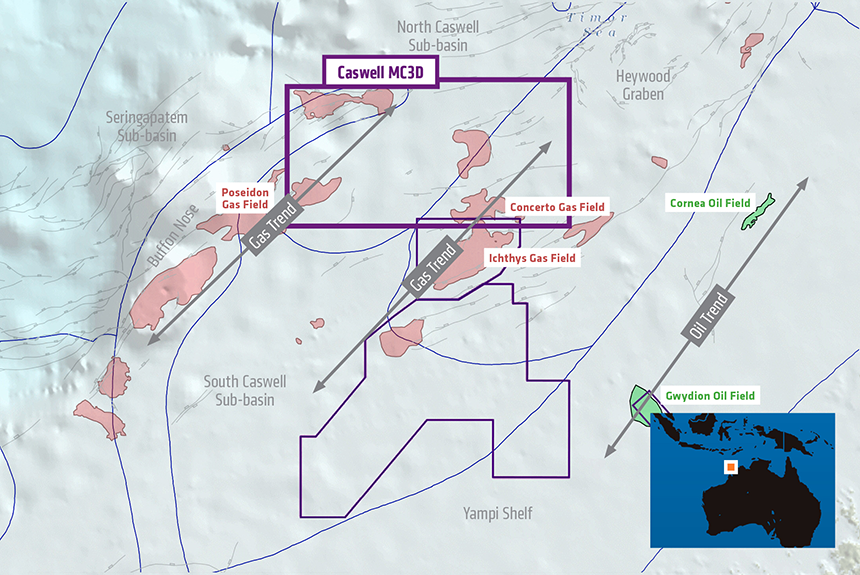 A complete wavefield seismic workflow, as illustrated below, was used to address the imaging and AVA inversion challenges in the Caswell sub-basin. Complete wavefield seismic describes the use of the natural outputs from GeoStreamer deghosting based on wavefield separation, namely the up-going pressure (P-UP) and down-going pressure (P-DWN) shot records. Whilst P-UP represents the preferred platform for both structural and quantitative interpretation (QI), including pre-stack elastic attribute inversion, the introduction of P-DWN into Separated Wavefield Imaging (PGS SWIM) enables new opportunities for a variety of seismic imaging, interpretation, and QI pursuits, particularly to delineate shallow geology.

The Caswell dataset was interpreted in three complementary stages: 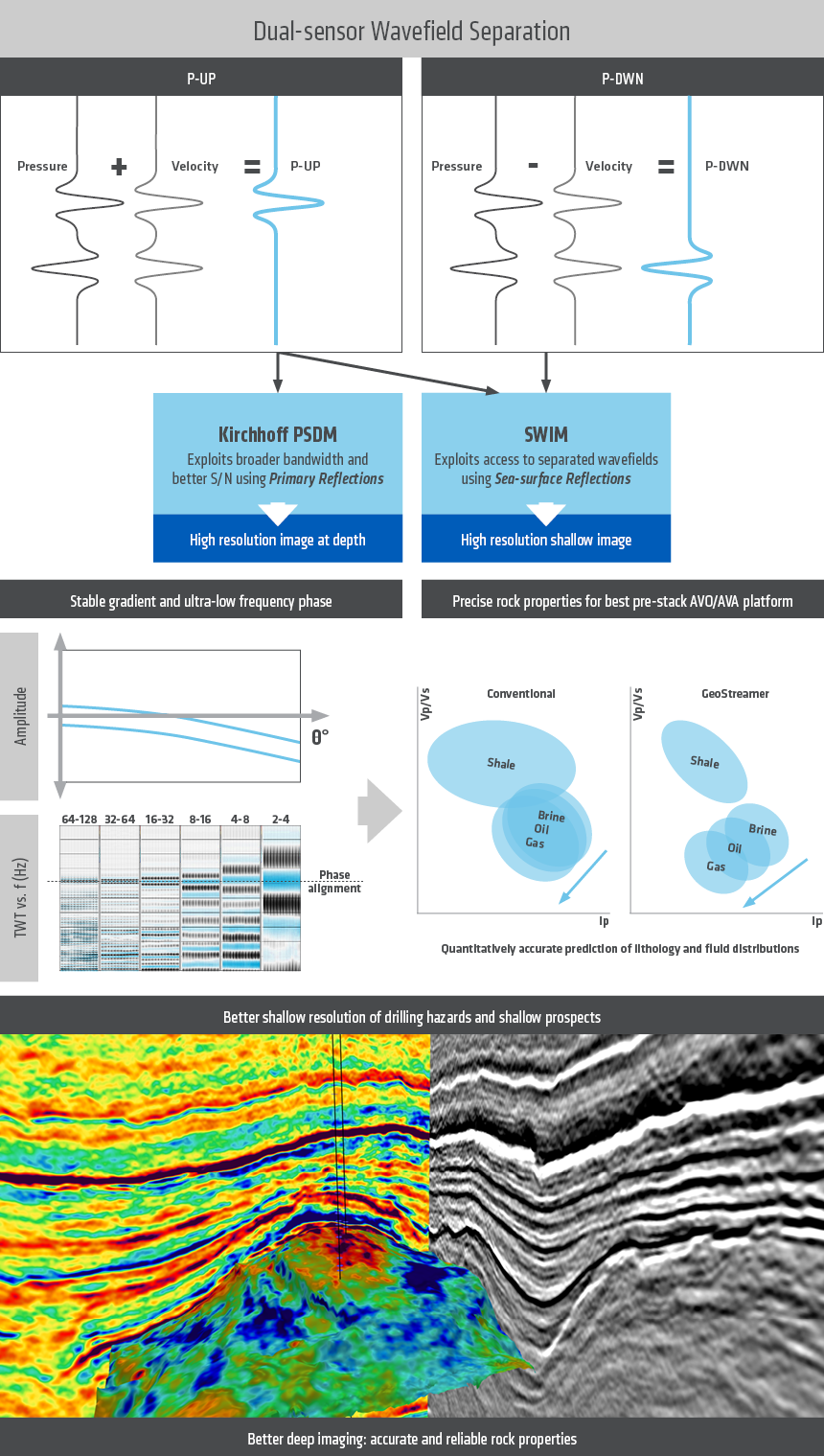 For the Caswell MC3D data, GeoStreamer P-UP shot gathers are used to provide information at target depths whilst both P-UP and P-DWN wavefields (SWIM) are used for shallow interpretation and characterization. Accurate lithology/fluid prediction is ensured by preserving a stable gradient and ultra-low frequency phase. The lower image highlights the complementary nature of elastic seismic attributes and seismic amplitude images.

The comparison of conventional and GeoStreamer seismic data below illustrates the outstanding ultra-low frequency signal penetration on GeoStreamer P-UP images in the survey area. This enables confident structural interpretation at all depths.

GeoStreamer data provides enhanced geological texture, with cleaner event continuity and character, sharper fault plane truncations and improved seismic-to-well correlations. All of this can be attributed to richer low-frequency amplitudes, higher SNR and enhanced higher frequency amplitudes. This notably translates into greater confidence in interpreting stratigraphic features in a region that has historically been limited to successful structural play interpretation.

Mapping and quantifying what is in the rocks

A multi-well rock physics analysis and AVA modeling effort has established that local rock properties and compaction effects enable weak sandstone vs. shale lithology discrimination in the reservoir formations, but fluid discrimination is challenging. This study confirms that P-UP GeoStreamer data can be used to distinguish between sand and shale populations and hydrocarbon-bearing sandstones if accurate and stable gradient terms can be extracted from pre-stack gathers and the ultra-low frequency phase is stable. These requirements were met because of the robust and accurate dual-sensor wavefield separation deghosting methodology.

P-UP GeoStreamer data extends the useful ultra-low frequency signal content by one to two octaves by comparison with conventional seismic data, so the traditional dependence on coarse, low-frequency models can be greatly relaxed during seismic inversion. Relative seismic inversion results produced without any well data control can be used as a successful proxy for absolute seismic inversions, and fluid saturation distributions can be mapped with confidence.

Bringing the shallow subsurface into focus

The fundamental geometry of wide-tow 3D streamer surveys typically means that the shallower data (certainly the first 0.5 seconds below the sea surface, and sometimes the first one second in settings such as here) is generally unfit for AVA studies or seismic inversion. PGS has, however, demonstrated for several years how SWIM mitigates the acquisition footprint effects for any acquisition configuration.

As demonstrated in the lower panel of the figure below, SWIM pre-stack gathers contain significantly better angle illumination for all depths, notably in the shallow range. These SWIM angle gathers are suitable for seismic inversion, thereby enabling the identification of (shallow) structural and stratigraphic reservoir plays. Although no shallow prospects were identified in the survey area, the workflow described here is applicable to the oil legs along the (shallower) basin margins.

Carbonate morphology was successfully delineated from the seafloor down to depths of about 900 m below mean sea level, thereby providing the platform for drilling hazard identification that is not available from conventional seismic images. 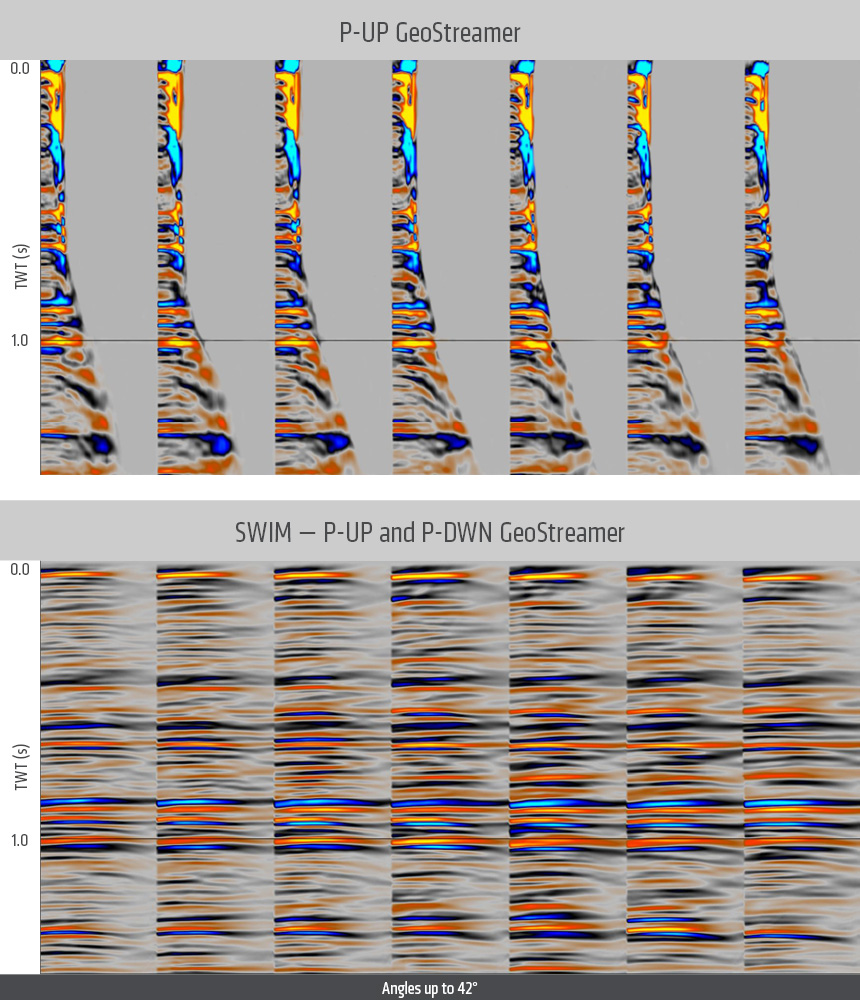 The primary reservoir fairways of the Browse Basin are being revealed in more depth and more detail by accessing the complete wavefield measured by GeoStreamer seismic data. Ultra-low frequency signal penetration and imaging of deeper (Permo-Triassic) stratigraphy and structures are greatly enhanced, and the resolution and image quality is better at all depths, up to and including the seafloor. These significant improvements in image quality, and the ability to reliably estimate rock properties make it possible to identify and de-risk new prospects. They are the consequence of having access to complementary information contained in up-going pressure (P-UP) and down-going pressure (P-DWN) seismic data.

Historical focus on the large structures targeted in gas exploration has meant that the search for subtle stratigraphic traps has been overlooked. Attention can now turn to the confident interpretation of stratigraphic targets at all depths, including untested oil legs along the basin margins. Now it is over to the interpreters to devise new plays to target. When they do, GeoStreamer data with SWIM imaging makes it possible to delineate shallow drilling hazards and characterize shallow lithology and fluid distributions.

Please contact a member of our Asia team for more information.