Marine Vibrators Get Closer to Reality

Why haven’t marine vibrators been adopted for marine seismic surveying? In part, because of a general perception that their acoustic output is too low to yield useful images, and more importantly because there has been an unfavorable capital allocation to support development. Increased concern about the impacts of seismic noise warrants further research into their benefits.

There is a wealth of knowledge available on the physics of underwater acoustic noise, but sensational claims are often made about the potential physiological and behavioral effects of acoustic noise on marine animals at various ranges, magnitudes and duration. In reality, there has been no documented scientific evidence of noise from air guns used in geological and geophysical (G&G) seismic activities adversely affecting marine animal populations or coastal communities, and the only publications that describe physiological damage involved the deliberate firing of air guns in the immediate proximity of marine animals for sustained periods.

At the heart of all claimed impacts of traditional marine sources is the fact that air guns have an impulsive acoustic signature. The rise time between the ambient background noise level and the maximum acoustic amplitude is only a few milliseconds, 99% of the energy is typically released into the water in only about 30 milliseconds (0.03 seconds), and the maximum amplitude is comparable to or louder than the calls of large whales.

By comparison, the acoustic signature of marine vibrators has a continuous (or transient) nature: The rise time between the ambient background noise level and the maximum acoustic amplitude may be several seconds, the energy is emitted in a reasonably uniform manner over 5 to 30 seconds (or more), and the maximum amplitude may be significantly less than impulsive acoustic seismic sources. Furthermore, the acoustic amplitude emitted at frequencies above about 100 Hz will be substantially weaker by comparison to impulsive acoustic seismic sources. 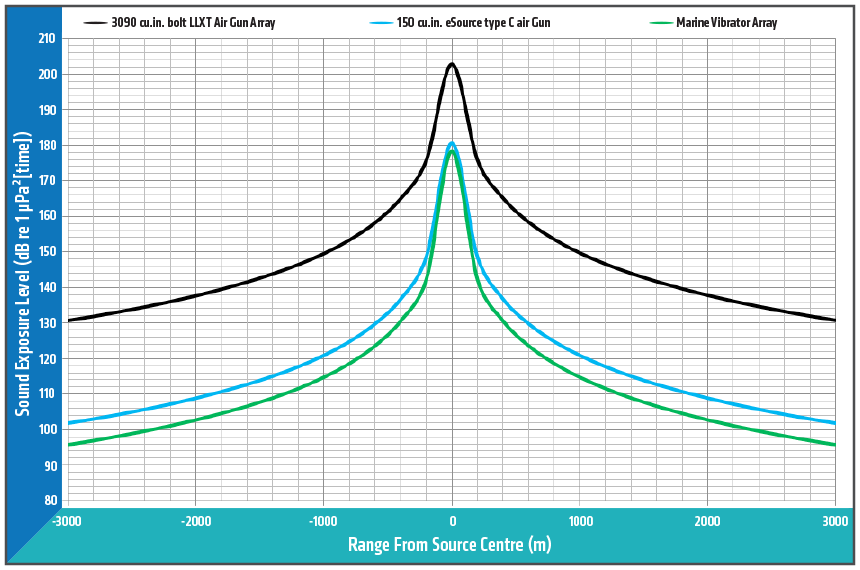 Working Hard or Sharing the Work 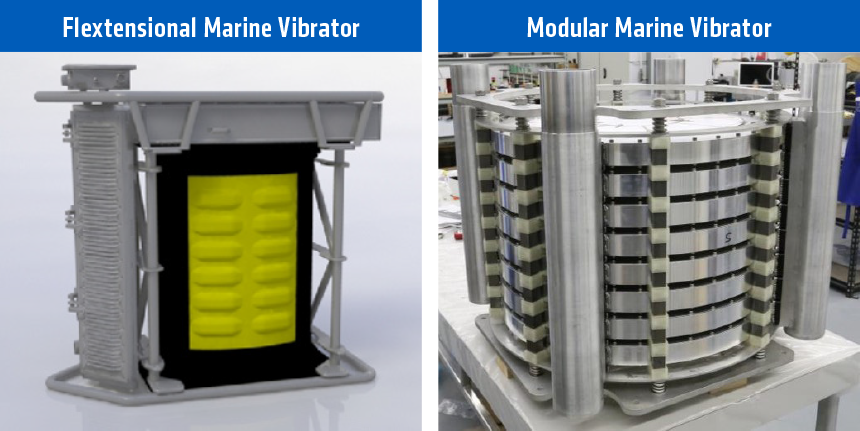 Many air guns of differing volumes are traditionally required in an air gun array in order to yield a relatively smooth amplitude spectrum: The principle known as ‘array tuning’. As a consequence, the net sound pressure level (SPL) of air gun arrays is in the vicinity of 240-250 dB re 1 µPa at 1 m distance. Conversely, only a small number of marine vibrator units are required to yield a comparable relative amplitude spectrum, so the net SPL may be significantly lower by comparison. The industry dogma that very large source SPL is necessary to achieve acceptable seismic imaging of deep geological targets may be turned on its head if field trials of marine vibrators are successful.