The integrated interpretation of high-resolution seismic and EM data is a reliable and effective method to unlock the Barents Sea.

A rising appetite for electromagnetic data (EM) was demonstrated by its inclusion in 10 work programs for Norway’s APA Round, announced in January 2016. With ENI's Goliat oilfield finally coming into production in March, an increase in the size of the Wisting discovery (Hoop area) announced in April, and Norway's 23rd licensing round awards due before the summer, there is also clear industry interest in the Barents Sea.

The Barents Sea southeast (BSSE) presents oil companies with an excellent opportunity to see for themselves how integrated interpretation of GeoStreamer and high-density 3D Towed Streamer EM data provides rapid and reliable insights that traditional approaches can miss.

Seismic data from the BSSE group shoot reveals many promising structures on Norway’s northern exploration frontier. However, drilling is never cheap, and now more than ever our customers need to rank their prospects rigorously, picking only the best to progress with. History has shown that not all exciting Barents structures have the saturation to match their seismic promise.

The thrill is best when the drill hits pay

It has been suggested that adding EM to seismic is rather like adding sight to sound. When scouting out a new territory, most people recognize the advantages of having both their eyes and their ears open, and all their wits about them. The integrated interpretation of two sets of independent data can help to resolve interpretation ambiguity, leading to new insights, reducing risk and ultimately saving E&P money. Every exploration team likes to drill but the thrill is best when the result is positive.

Having acquired additional MultiClient volumes of both 3D GeoStreamer and 3D Towed Streamer EM data in the Barents Sea, PGS is in a unique position to help oil companies to access information about pockets of resistivity and thereby increase their understanding of this frontier area before they drill.

The Lower to Middle Jurassic is one of the main plays in the Barents Sea and was targeted as part of the GeoStreamer and Towed Streamer EM acquisition undertaken prior to the recent 23rd Licensing Round application deadline.

By comparing high-resolution velocity and resistivity models created from GeoStreamer and Towed Streamer EM data, we are able to make a robust identification of background trends that can help to make a confident assessment of the Jurassic prospectivity, as well as highlighting the exploration potential at both deeper and shallower levels.

The dense sampling of the Towed Streamer EM data has allowed us to use an unconstrained inversion to determine the sub-surface resistivity. This is extremely useful in a frontier exploration setting where geological knowledge is limited. There are no wells in the BSSE and little a-priori information to provide model parameter constraints. The resultant resistivity model is a reliable, independent source of information.

Early exploration hypotheses can be tested by correlating the velocity and resistivity models. This can also reveal new possibilities. The process is relatively straightforward. A high-resolution velocity model is one of the products of the CWI workflow routinely used on GeoStreamer 3D data. Although the resolution is different, both the seismic and the EM volumes are in the depth domain, which facilitates their integration for joint interpretation.

First, we simply overlay the seismic and EM volumes and examine the degree of conformance between the main stratigraphic boundaries and resistivity units. Then we compare the high-resolution velocity and the sub-surface resistivity models and estimate the background resistivity trend. Finally, we examine the relationship between the various attributes. There is a clear correlation between resistivity anomalies, low velocity, and structural highs. As a further step, resolution can be improved by introducing seismic horizons to carry out a guided inversion.

The complementary Barents Sea seismic and EM datasets span a large area, in a region where EM has proven its worth in the past. PGS is able to offer a highly competitive package, thanks to exceptionally efficient acquisition using the Ramform and the Towed Streamer EM solution. The Barents Sea is already on the radar for many exploration teams. These dual data sets reveal why, but before you decide which structures deserve further investment, why not analyze all the signals: sight and sound? This is a unique opportunity to gain the inside track in the race for the next big discovery in the Barents Sea. 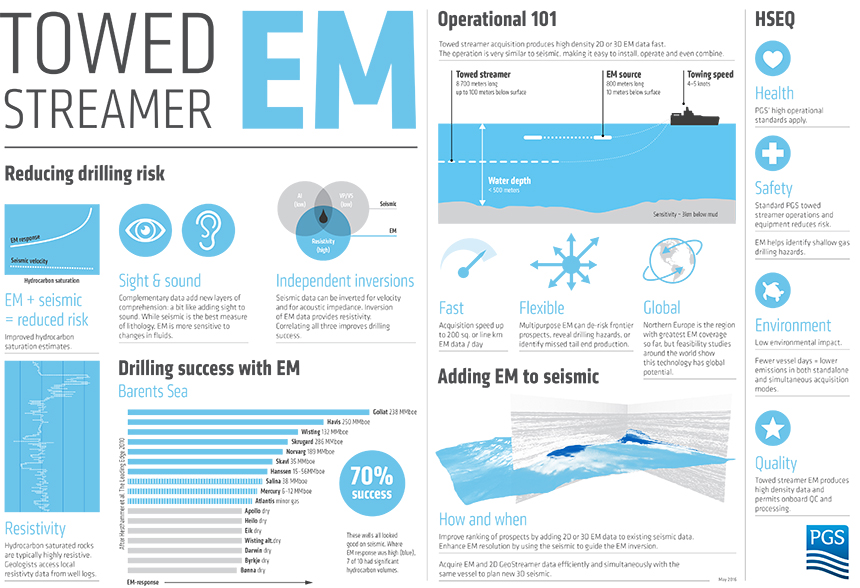 Integrated seismic and EM images for Wisting central and Bjaaland. The EM inversion clearly indicating an anomalously high resistivity response at the main well location and a low response at Bjaaland, consistent with the results of the well which was dry.

Cross plot of the average resistivity anisotropy against velocity for a 200 m interval within the Jurassic that encompasses the two main structures (Haapet Dome) on the Bjarmeland platform area of the Barents Sea South East. While the sub-surface may be intrinsically anisotropic, anomalously high anisotropy can help to identify localized zones of increased resistivity. Therefore, the correlation between high resistivity anisotropy and low velocity at or near the crest of the domes may indicate areas worthy of further investigation. 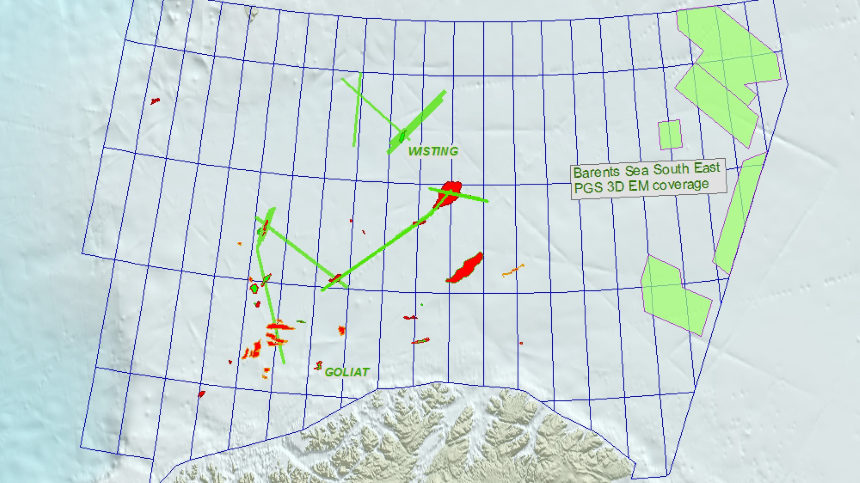