The card design matches a standard-sized passport, making it easy to carry. They have been issued to all offshore crew and many others who travel regularly. The idea was born on one of our seismic vessels.

Our offshore crew are occasionally confronted by requests for small facilitation payments. This typically happens during customs or passport checks and it can be a stressful situation because PGS does not condone facilitation payments. The problem was discussed during an anti-corruption workshop onboard our vessel Ramform Sovereign. The crew came up with the idea of having a card that they could show to officials, to explain that they were not allowed to make payments. The suggestion was passed on to our compliance department.

“We should remember that to avoid getting into difficult situations, it is important to be well prepared,” says Carl Deschington, Head of Compliance. “You should make sure you have plenty of time and have all the necessary documentation. But if you do get pressure then these cards help.”

The cards proved to be useful when a PGS vessels was recently subject to a local inspection. The inspector claimed to have found a seemingly unfounded fault and demanded payment in the form of bottles of olive oil, threatening to impose a fine if we refused to deliver the oil. When the PGS captain showed his “We don’t pay” card, the inspector changed his conclusion and gave us a clean report.

We recently printed our third batch of these cards, following positive feedback from employees who clearly value this new tool to prevent corruption. 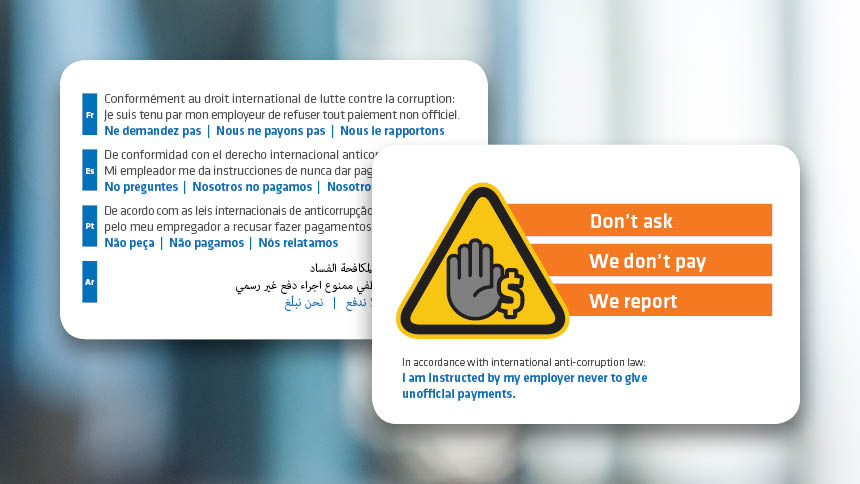