GeoStreamer is regularly claimed to be the optimum prestack platform for seismic inversion and quantitative seismic interpretation studies, but what does this mean?

The success of any prestack seismic inversion project depends upon a series of steps being executed accurately in a sequential and thus inter-dependent manner. The discussion here assumes that all well log and check shot editing and calibration, petrophysical analysis, and seismic pre-stack data conditioning has been done optimally. This includes velocity model estimation so that the key remaining sources of uncertainty include wavelet estimation, the frequency and signal-to-noise characteristics of the seismic data, and the parameterization of the inversion workflow. Consideration is given below to minimizing error and uncertainty in each of these steps.

Working in the impedance domain is an optimal platform to exploit the value of high-quality broadband seismic data—both for improved well ties and for quantitative prediction of lithology and fluid properties. As a general observation, conversion from reflectivity (amplitude) to impedance is convenient for several reasons, including better correspondence to stratigraphic layering, removal of the wavelet effect, reduced tuning effects, general relationships to petrophysical properties and so on.

Historically, the lack of low-frequency reflectivity signal in marine seismic data restricted the impedance data derived from relative inversion or colored 'inversion' (not actually an inversion) to simple reconnaissance interpretation and prospect screening, aided by the closer resemblance of impedance images to the geology than the equivalent reflectivity images; the contrast between impedance being a layer property and reflectivity being controlled by impedance contrasts at layer boundaries. When the low-frequency phase and amplitude versus angle content of broadband data has been correctly preserved, the inversion of such data enable quantitative interpretation in a manner approaching the use of absolute seismic inversion results—particularly when robust low-frequency model building can be facilitated by Full Waveform Inversion (FWI) in the manner of Feuilleaubois et al. (First Break, March 2017).

Particular attention is now given to the mechanics of wavelet estimation, AVA gradient conditioning and attenuation compensation for elastic characterization of lithology and fluids, and the considerations for zero offset seismic-to-well ties. Overall, the use of broadband well log data is demonstrated both in terms of zero offset and multi-angle applications.

Schematic illustration of Bayesian wavelet estimation. The ‘most likely’ wavelet for each angle stack (blue dot) is estimated from a series of realizations using available well data, seismic data, and various priors.

Traditional options for seismic wavelet estimation include the use of deterministic wavelets (e.g. band-limited Ormsby), statistical wavelet estimation (based upon the frequency content of the relevant seismic data), deterministic wavelet extraction (Walden et al., 1998), or Bayesian wavelet estimation (implicitly assumes the availability of useful well log data: Gunning and Glinsky, 2006). Each method makes important assumptions and approximations, and errors will typically translate to inaccurate prediction of elastic lithology and fluid properties, and inaccurate well ties. Control of the phase spectrum during wavelet estimation is historically far more challenging than control of the amplitude spectrum. Indeed, whilst several processing-based ‘broadband’ seismic methods can be manipulated to yield an impressively flat amplitude spectrum on stack data, the associated phase spectrum can easily be corrupted—particularly at low frequencies below about 10 Hz where the amplitudes output by air gun arrays decay rapidly. Most seismic inversion methods assume the wavelet has constant phase across all reflection angles of interest. An important part of the PGS ‘Reservoir Oriented Processing’ flow (ResOP) is QC of AVA and phase integrity at each step of the processing.

Statistical wavelet extraction has the luxury of requiring no well information and only uses the seismic amplitude data, however, it is assumed that the seismic data and well are in phase, and the seismic data is noise-free. Well log data will preferably be incorporated into any wavelet estimation process, but a problem exacerbated by the growth in broadband seismic methods is the fact that most logging intervals only span short vertical distances; sometimes only the producing reservoir interval itself. If 2 Hz information really is present within the seismic reflectivity data it follows that elastic well logging (P-wave sonic, S-wave sonic, and bulk density) should span a vertical window of one-second two-way time (TWT). It can often be practical during Bayesian wavelet extraction to use the statistical wavelet as a priori information.

Bayesian wavelet estimation follows a workflow that preferably uses many wells containing a large amount of petrophysical data recorded over a long depth interval and several seismic angle-range image-gathers to derive a series of maximum likelihood wavelets (depth-, angle- and possibly spatially-variant), time-to-depth relationships (such as can subsequently be used in geostatistical depth corrections), and noise estimates. The algorithm can accommodate multi-wells and multi-angle stacks at the same time, but it is advisable to start well-by-well (with multi-angle stacks) before performing the analysis on a multi-well basis. ‘Priors’ included in the stochastic workflow include the phase and length of the wavelet, its location, and check shot uncertainty. The figure above schematically shows the statistically most likely near and far angle stack wavelets determined from several realizations using Bayesian wavelet estimation and the figure below shows an example where wavelets for five angles are derived after the introduction of a prior statistical wavelet for the Near Stack. 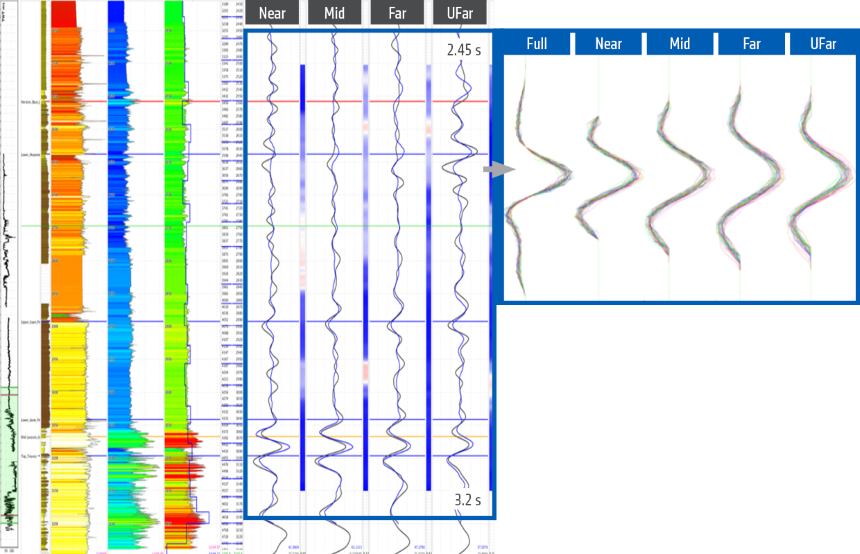 Bayesian wavelet extraction results after introduction of a prior statistical wavelet for the Near Stack.

Shown below is a North Sea comparison of conventional hydrophone-only and GeoStreamer data taken through comparable processing flows and pre-stack simultaneous seismic inversion. The Vp/Vs attribute is draped over an interpreted Top Reservoir horizon and also shown in vertical section at the well location. The well was drilled on an ambiguous Vp/Vs anomaly using conventional streamer data and intersected no hydrocarbons. By comparison, inversion of the GeoStreamer data acquired subsequent to drilling, reveals no such 'very low' Vp/Vs anomaly and provides no encouragement to drill at that location, or at least with an increased risk of being a non-hydrocarbon area. Note the much cleaner character of the GeoStreamer Vp/Vs result: a testament to better AVA and phase integrity, and significantly better low-frequency signal content. 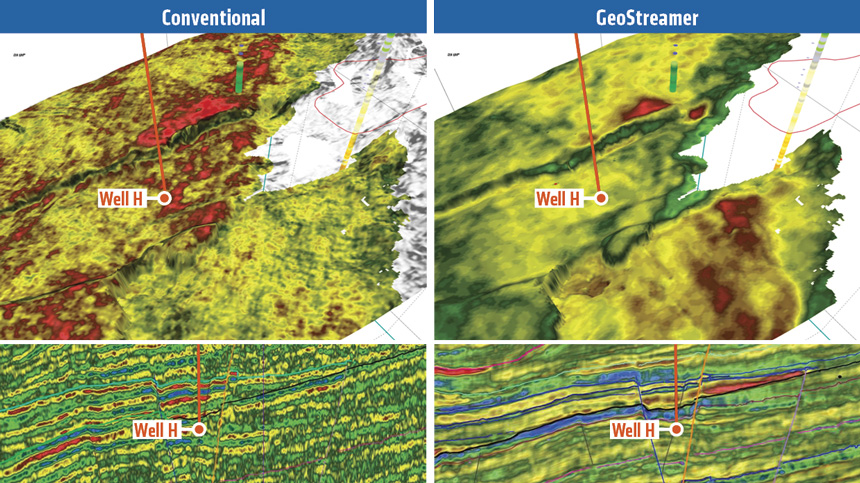 The next figure below also reinforces that recovery of higher frequency amplitudes, lost to attenuation during wavefield propagation, is necessary to accurately resolve thin stratigraphic features of interest; even using seismic inversion results from GeoStreamer data. Note the outstanding correlation of the reservoir thickness on the middle well on the right of this figure, the improved delineation of most stratigraphic layers and the correct up-dip intersection of the shallow reservoir formation on the left well. Seismic gather conditioning included residual moveout corrections, the application of trim statics, denoising, and Q compensation.

The illustration below shows how an optimal zero phase wavelet (GeoStreamer example) will have negligible side lobes, and therefore yield a better resolution of stratigraphic layering. We should also be prepared for ‘less events’.

Schematic illustration of the representation of layer contrasts on broadband and conventional seismic images. Broadband stack images should contain less spurious seismic ‘events’ and have a pseudo representation to impedance images derived from seismic inversion.

The next figure shows full offset stacks from a producing oil field in the North Sea. The reservoir is contained in the formations of the Middle Jurassic Brent Group. In this area, they form a 450 ft thick sequence of sands and interbedded minor shales, which has been deposited by a shoreface and delta system prograding northwards across the Viking Graben. The seal is formed by the shales of the Middle/Upper Jurassic Heather Formation (the strongest amplitude black event in the center of each stack section). The left-hand side shows a band-limited conventional towed streamer dataset containing both source and receiver ghost effects, and the seismic wavelet used to compute the various well synthetics was derived using statistical wavelet extraction using this data. The right-hand side of the figure shows GeoStreamer data with the corresponding broadband wavelet extraction used for the well synthetics. 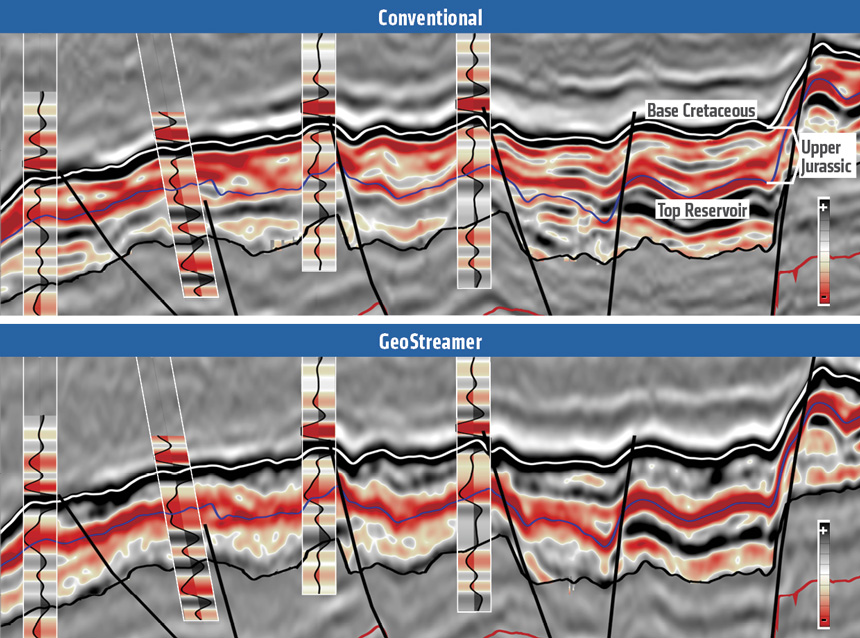 The GeoStreamer data after pre-stack seismic inversion is shown below; color corresponds to acoustic impedance. Each stratigraphic layer has sharper delineation, and the GeoStreamer impedance image shows remarkably accurate vertical ties to the impedance boundaries on the various well impedance logs (filtered to the seismic bandwidth).

GeoStreamer data that faithfully preserves pre-stack AVA and phase information, particularly at ultra-low frequencies (< 10 Hz), enables more robust and stable wavelet extraction, more accurate well synthetic generation, correct elastic impedance estimation, and better well-seismic ties both in terms of stack reflectivity and elastic impedance—the preferred lithology representation. It is necessary, however, to acknowledge that any pre-stack seismic inversion project depends upon a series of steps being executed accurately in a sequential and thus inter-dependent manner. Wavelet extraction will be both customized to, and compromised by the nature of available well data. Seismic gather processing must faithfully preserve AVA and phase integrity, particularly for low frequencies, compensate for attenuation effects, and be customized to optimize the pre-stack seismic inversion process. With these ingredients in place, the quality of well ties to GeoStreamer data is demonstrably better, facilitating the interpretation of elastic seismic attributes with minimum risk.