Towards the end of 2020, PGS completed its sixth towed-streamer marine seismic acquisition project with a novel wide-tow multi-source configuration. These six wide-tow source solutions were applied in two advanced GeoStreamer X multi-azimuth (MAZ) programs in the North Sea, offshore Norway, in exploration surveys offshore Australia and the UK, and most recently during two high-resolution surveys in the Barents Sea.

Traditionally, marine seismic sources have been towed in front of the two innermost streamers of a streamer spread. The standard source separation for a typical towed-streamer seismic survey is defined by dividing the streamer separation by the number of source arrays.

However, a wider separation between the source arrays can improve the near-offset coverage without sacrificing survey efficiency. This is especially relevant for shallow water areas with relatively shallow targets, where good near-offset or near-angle coverage is required for robust AVO analysis or for effective multiple removal.

Wider tow of sources also extends the common midpoint (CMP) coverage per sail line, i.e., the so-called ‘CMP-brush’ becomes wider. The number of CMP lines or sublines acquired per sail line is equal to the product of the number of source arrays and the number of streamers. The separations of the source arrays and the streamers do not have a direct impact on the number of CMP lines acquired, but do control the CMP line spacing. Thus, the wider ‘CMP brush’ that results from a wider source separation is the result of partially sparser spatial sampling in a crossline direction, and not the outcome of acquiring additional data.

When combining standard streamer spreads with wide-tow sources, regular sampling can be achieved by means of overlapping the CMP brushes. Ultimately, the combination of wide-tow multi-source configurations with high streamer counts enables higher acquisition efficiency without trading off near offset coverage or sacrificing regular crossline sampling (see figure below).

Read more about wide-tow sources and novel marine acquisition geometries in these articles:

With increasing flexibility in towing solutions, and the increase in the number of sources and the total source spread width, the imaging of the very shallow subsurface is now possible during 3D exploration grade surveys in a cost-effective manner.

Optimizing near-offset sampling has obvious benefits for resolving illumination and resolution challenges, particularly in areas where the impedance contrast at the seafloor limits the amount of sub-critical reflection energy. Processes such as demultiple, velocity estimation, and quality control (QC), directly benefit, and thereby enhance the seismic imaging quality at greater depths.

Processing of wide-tow source data is for the most part unchanged, if the relevant signal processing algorithms take into account the real position of the sources relative to the streamer spread, as is the case in the examples shown in the case studies below.

With adequate data preparation, another benefit of the wide-tow sources is the richer azimuth distribution obtained with a single vessel pass; which implicitly can provide greater illumination of complex subsurface environments. Likewise, it yields a better lateral distribution of source lines; which typically reduces the risk of introducing footprints in seismic attributes maps. 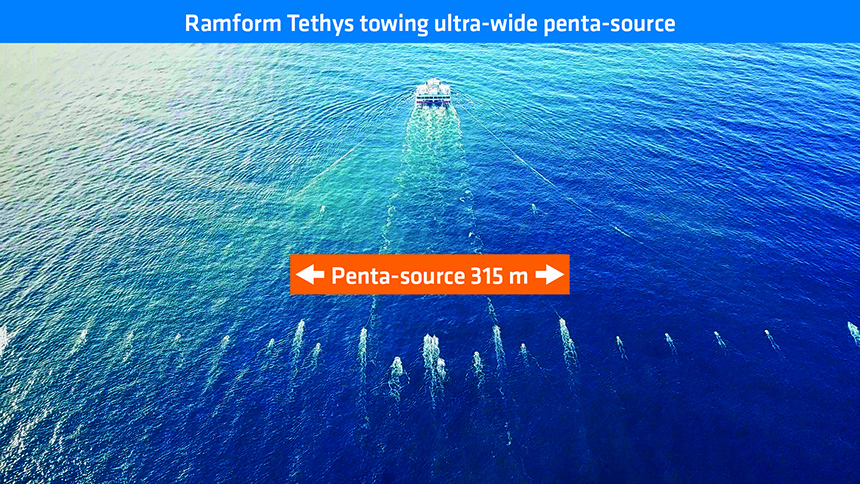