A large regional GeoStreamer multisensor dataset covering 18 000 sq. km in the central North Sea Central Graben has recently been depth processed as a contiguous dataset (GeoStreamer PURE). One of the main objectives of the reprocessing was to better image the main producing chalk fields in the Upper Maastrichtian and Danian layers (Ekofisk and Tor Formations) such as Ekofisk, Eldfisk, Valhall, Dan-Halfdan, Tyra and Gorm, using advanced depth imaging techniques.

A bespoke Quantitative Interpretation (QI) workflow for chalk characterization has been developed and implemented, demonstrating the value of high-quality pre-stack broadband seismic data integrated with extensive well data analysis for the mapping of porosity variations and for predicting hydrocarbon accumulations in these very challenging chalk reservoirs.

The chalk play of the North Sea Central Graben spans the Norwegian, Danish and UK sectors and its reserves approach 10 billion barrels of liquids and almost 5 billion boe of gas. As opposed to clastic reservoirs, the quantitative interpretation of carbonates and chalk reservoirs requires careful rock physics analysis integrated with reliable pre-stack elastic attributes. Such attributes need to be correctly calibrated with well log information to understand the variability of the chalk reservoir facies.

The high-quality broadband seismic depth data used in the pre-stack inversion workflow has proved to be of high fidelity and enabled the differentiation of the intra-chalk layering highlighting both lateral and vertical changes away from the wells.

Regional rock physics results presented in the paper demonstrate that a combination of robust elastic attributes (here acoustic impedance and Vp/Vs) from broadband multisensor seismic data have the potential to distinguish hydrocarbon-filled high-porosity chalk from water-wet anomalies. To enable such separation, one of the key aspect of the QI workflow was the integration of the end-member picking with the seismic pre-stack absolute inversion results through a Bayesian lithology-fluid classification process.

Clear improvements in the characterization of the chalk at a regional scale using a combination of a regional rock physics model and AVO-compliant broadband pre-stack seismic data has been demonstrated in the paper. The QI workflows presented have improved the mapping of porosity changes both vertically and spatially and enabled better prediction of fluids in the chalk through the depth-dependent Bayesian lithology fluid classification. This approach can be effective for right-risking/right-sizing/derisking of remaining opportunities in the North Sea Central. 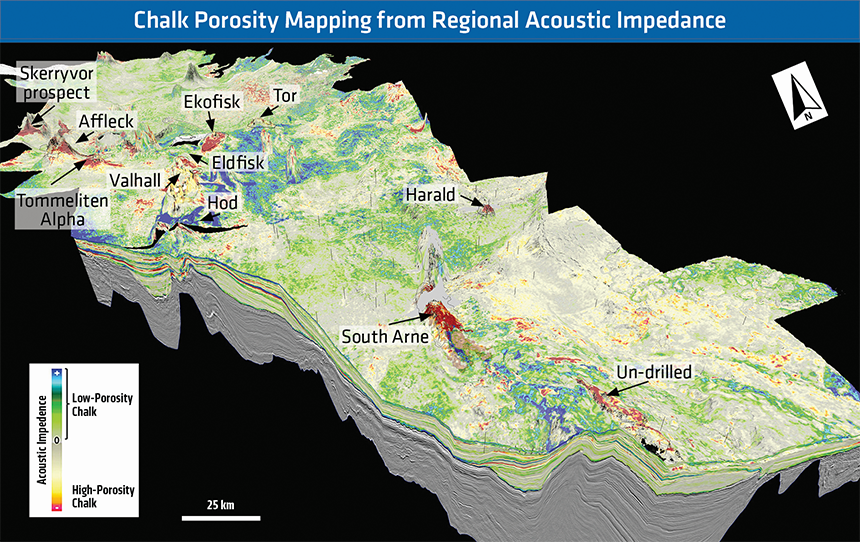