Ten years on the 'marine broadband seismic' market, GeoStreamer technology still reigns supreme because fundamental physics will always apply. The adoption of multisensor streamers by other large seismic companies is a testament to the virtues of GeoStreamer as the best geophysical platform.

Rather than attempt to manipulate the pressure measurement from hydrophone-only streamers to predict particle velocity measurements in the vicinity of ghost notches, GeoStreamer explicitly measures both pressure and particle velocity using collocated sensors everywhere along the streamer. There is no substitute for measuring the seismic wavefield you are trying to understand.

The concept of multisensor towed streamer acquisition. Complementary sensors collocated everywhere along the streamers enable perfect cancellation of the receiver ghost effects for all depths and offsets.

1. The up-going pressure wavefield ('P-UP') that has been scattered upwards from the earth without interacting with the acoustic mirror of the ocean surface, and

2. The down-going pressure wavefield ('P-DWN') that is a version of P-UP reflected downwards from the dynamically moving ocean surface (See illustration above).

If we sum P-UP and P-DWN we yield the seismic wavefield recorded by hydrophone-only streamers; heavily contaminated by 'ghost notches' and various noise related to weather and environmental conditions at the surface of the ocean. By isolating P-UP we can derive broad bandwidth, clean and high-resolution seismic images of the earth—without the unwanted contributions of P-DWN that contaminate all forms of hydrophone-only streamers. The process of real 'wavefield separation' is what sets PGS and GeoStreamer apart from all other 'broadband' marine seismic solutions.

It must be noted that others attempt to replicate wavefield separation by manipulating pressure measurements to simulate what are claimed to be acceptable approximations to P-UP and P-DWN. Such efforts necessarily assume that the ocean surface was flat throughout the survey and perfect signal can be recovered from frequencies affected by ghost notches—entirely unrealistic. The fact that others never subsequently use such data for the 'separated wavefield' applications promoted by PGS is a demonstration that pseudo-P-UP (and pseudo-P-DWN) has no value beyond the seismic images used for basic geological mapping and interpretation.

So what are the benefits of real wavefield separation using explicit dual-sensor measurements? The most famous example is Separated Wavefield Imaging (SWIM), the PGS process that enables every receiver within the streamer spread to be used as a virtual source for every shot. In other words, the seismic wavefield can be injected into the earth from every receiver location rather than one source location, many thousands of times throughout the survey area. The net benefits are extended seismic image coverage and substantially improved spatial resolution and image quality, particularly in the near-surface (see illustration below). SWIM has matured substantially in recent years and is being applied with great success to seafloor-based dual-sensor acquisition platforms such as ocean bottom cable (OBC) and ocean bottom node (OBN).

SWIM is possible because multisensor wavefield separation perfectly isolates P-UP and P-DWN. The availability of P-DWN means every receiver can be used as a 'virtual source', thereby significantly extending subsurface illumination in both the cross-line and inline directions

Another benefit of real wavefield separation is that it is quantitatively accurate for reservoir characterization studies (see figure below). Extensive global studies verify that GeoStreamer is clearly the best platform for pre-stack amplitude versus angle (AVA) studies, seismic inversion, and other quantitative interpretation (QI) pursuits. Calibrated ultra-low frequency amplitudes and phase reduce side lobe amplitudes on zero phase reflection wavelets, improves the 'geological texture' of seismic images, reduces the dependency upon well control during seismic inversion and reduces drilling risk during exploration and appraisal programs. GeoStreamer has enabled QI studies ahead of the drill bit to be reliable and accurate (see also Reiser et al., First Break 2012). 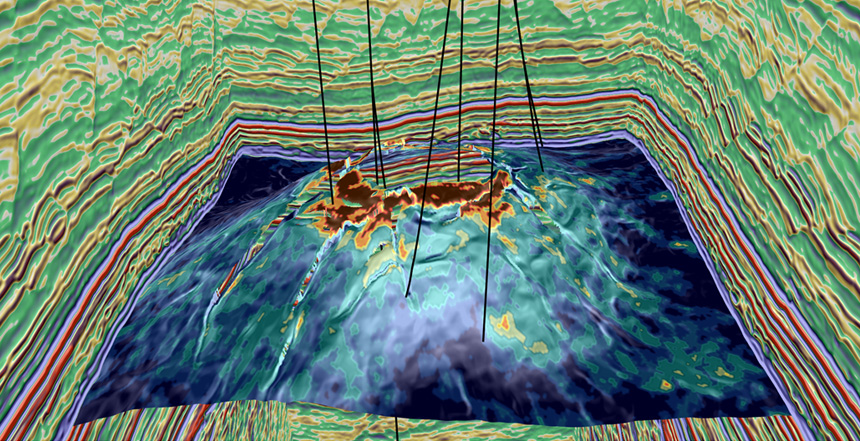 And now PGS has extended the 'wavefield separation advantage' by combining both SWIM and QI in the same workflows (Feuilleaubois et al., First Break March 2017). No other 'broadband' streamer solutions have this capability for a simple reason: Separated wavefield-based reservoir solutions require the platform of multisensor acquisition. SWIM has been demonstrated to be as AVA-compliant as Kirchhoff pre-stack depth imaging, and when combined with Full Waveform Inversion, accurate absolute elastic attributes can be estimated without well control, thereby de-risking many prospects—particularly those with shallower depths that are historically compromised by the fundamental limitations of hydrophone-only seismic datasets.

Operationally, the availability of multisensor streamers means that the streamer depths can be configured with any depth profile that minimizes drag and weather impacts whilst maximizing efficiency, and does not create any challenges for data processing. In contrast, when hydrophone-only streamers are configured with variable depth profiles there are attendant operational and geophysical challenges.

The addition of cross-line sensors to seismic streamers can be motivated by geophysical or operational considerations. Claims are sometimes made that the availability of cross-line sensor information can be used for aggressive spatial interpolation between the streamers. In practice, the accuracy of interpolation rapidly decays away from the physical streamer locations, the methodology relies upon streamers being no more than 75-100 m apart, success is limited to the near-surface, and will typically be band-limited, particularly when the shallow geology has large dips in the cross-line direction. Operationally, the construction of very long seismic streamers with a narrow diameter and low drag requires the use of very small accelerometers. If wavefield separation is an ambition with three-component streamers there is a subsequent requirement for both vertical and cross-line component sensors plus inclinometers to be available so that the rotational streamer orientation can be understood.

In 2017, the three largest marine seismic service companies are all offering dual or multisensor streamer technology; the validation of what PGS started in 2007. Hydrophone-only streamers served the industry well for several decades but the desire to tow streamers deeper and reduce weather and surface-related noise was confounded by the 'ghost' effects. Whilst logistically challenging 'slanted' streamer towing combined with signal manipulations in data processing can improve the appearance of seismic images, such data are not optimal for more advanced seismic imaging and reservoir characterization pursuits. Quite simply, the multisensor platform delivers the 'sweet spot' for operational efficiency and robust, accurate seismic data applications.

With the most modern and capable seismic fleet in the industry, all fitted with multisensor GeoStreamers, PGS is positioned to lead the way for many years to come.