Get a Time-Lapse Perspective

Five new PGS publications highlight fundamental areas where advances in marine 4D acquisition and processing are improving 4D repeatability and the detection of weak changes in reservoir state. They are presented for the first time at EAGE 2017 in Paris.

Benefits of Adding the 4th Dimension

Time-lapse seismic adds the fourth dimension to traditional 3D seismic acquisition. Whereas 3D seismic provides a static image of the earth, 4D provides an evolving understanding of what happens within a producing reservoir and why the production profile of the various wells behaves as it does.

One well-known application has been the identification of depleted or bypassed zones within the reservoir; heterogeneities in reservoir properties that cannot be understood using standalone 3D datasets. Reservoir engineers seek to minimize drilling risk, optimize the initial distribution of producing and injector wells, maximize the production time between initial well completion and uneconomical water saturation, and ultimately, to manage all successive producing and injector wells such that maximum recovery of reserves proceeds with minimum cost and risk. Relevant considerations include the cost-effectiveness of wells being planned, extending the life of depleted reservoirs, and avoiding production profiles that unnecessarily result in stranded reserves.

3D reservoir model construction, production simulation, and model updates rely upon the reference seismic data from each vintage of acquisition; baseline and each monitor survey, having optimal resolution and image quality. Of utmost importance, the acquisition geometry needs to be repeated as precisely as possible each time, or the processing applied needs to robustly compensate for the various differences in acquisition without compromising the fidelity of the relevant underlying weak changes in seismic signals. Our clients, the oil companies, demand continuous efforts to make 4D seismic data more relevant, more accurate, and more informative.

PGS publications at the 2017 EAGE conference in Paris highlight four fundamental areas where advances in marine 4D acquisition and processing are improving 4D repeatability and the detection of weak changes in reservoir state:

Anderson et al. (PGS and Statoil) review the 32-year history of 4D surveys over the Gullfaks field in the Norwegian North Sea. The use of High-Density 3D (HD3D) streamer spreads from 2008 onwards has culminated in the sum of the difference in source and receiver positions for a given trace pair between consecutive surveys (|dS + dR|) being reduced from an average of 100.48 m to 18.95 m. Most notably, the availability of Ramform vessels towing up to 17 streamers at 50 m separation doubles fold and yields 20-25% relative improvement in the normalized RMS amplitude difference (NRMSD) by comparison to 100 m streamer separation.

As discussed in the recent feature article titled ‘Dual-Sensor Stands High After Ten Years’, dual-sensor GeoStreamer® acquisition enables wavefield separation in processing. The up-going pressure wavefield (P-UP) is the ghost-free wavefield that contains no imprint of the dynamic sea-state, whereas the down-going pressure wavefield (P-DWN) does carry the dynamic sea-state imprint that varies from shot-by-shot, and therefore contributes non-repeatable noise to any 4D project. Anderson et al. note that in addition to providing the optimal P-UP monitoring platform for future 4D surveys, the availability of GeoStreamer means that the streamers can be towed deeper with less noise, and the data can be accurately redatumed (where necessary) to match the depth of legacy hydrophone-only surveys, courtesy of wavefield separation.

Goertz et al. model the impact on 4D repeatability of subtle changes in source signature and directivity as a function of sea state and its effect upon air gun array depth and geometry. Up to 4% NRMSD can be attributed to such effects. It is noted that wave-induced directivity variations are difficult to correct for in processing as they are typically not captured in shot-by-shot measured signatures and the exact pitch and roll of the array on a shot-per-shot basis is unknown. Furthermore, wave-induced directivity variations depend mainly on the wave steepness and to a much lesser extent on the sea state or significant wave height.

Tabti et al. introduce a robust and efficient method to generate shot-by-shot signatures that accounts for continuous changes in the source array geometry (refer to figure below), accounts for the relative motion between pressure-emitting bubbles and the near-field hydrophones, and accounts for the non-linear rise profile of bubbles. As such, the method represents a new level of sophistication in this art. 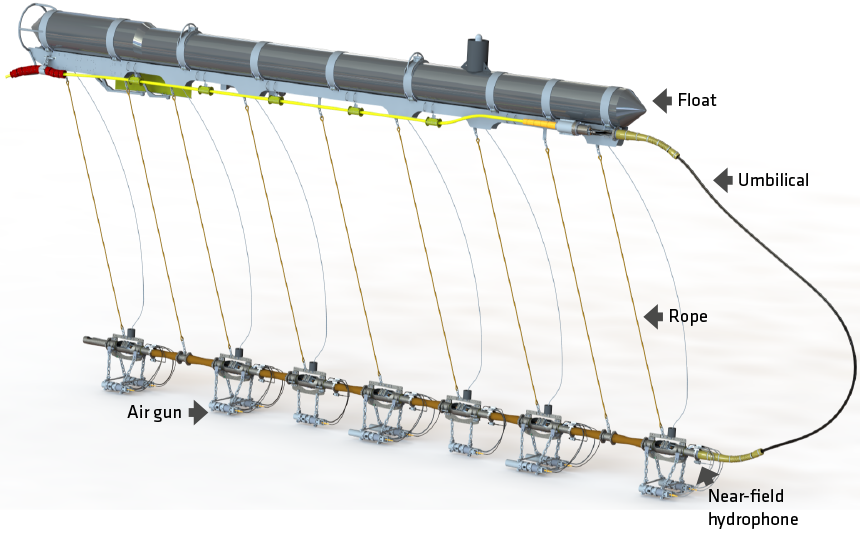 One sub-array with several airguns suspended below a surface float. The umbilical supplies air, power and telemetry to the airguns, associated hardware and the near-field hydrophone mounted above each airgun location. A source array consists of one or more sub-arrays typically fired in unison. During each shot the gun depths and locations move around slightly, as does the relative distances between guns when two or more sub-arrays are used.

The slider image below illustrates how ‘jittery’ variations between near offset traces, each corresponding to a unique shot, become very uniform after the application of shot-by-shot corrections in processing. Such considerations become more relevant as the observed sea state deteriorated from 0.5 m significant wave height to 5.5-6.0 m significant wave height, and are consistent with the phenomena modeled in both Asgedom et al. and Goertz et al.

A deepwater PRM pilot in the Campos Basin, Brazil uses trenched fiber optic OptoSeis® technology. 35 km of multi-sensor receivers are optimal for both up-going pressure (P-UP) and separated wavefield imaging (SWIM) using both the up-going pressure wavefield (P-UP) and down-going pressure wavefield (P-DWN). 712 four-component receivers are deployed every 50 m along 11 receiver lines with about 300 m line separation. A 25 x 25 m shot grid has dimensions of about 11 x 11 km. as shown in the figure below, SWIM extends the near-surface image spatial extent from the physical dimensions of the receiver coverage to the physical dimensions of the source grid.

Lecerf et al. simulate sparse PRM geometry by creating receiver gaps greater than 500 m, effectively only using half of the receivers. No compromise in 4D resolution can be observed when comparing SWIM 4D difference images of consecutive monitor surveys for all receivers vs. decimated receivers. Reservoir illumination when using SWIM is driven by the grid of 4D shot locations and not the receiver deployment at the seafloor. Therefore, large receiver gaps can be accommodated with appropriate PRM survey design, offering significant economic impact in terms of receiver deployment flexibility. More details on the amplitude vs. angle (AVA) compliance of SWIM can be found in our 'Dual-sensor stands high after ten years' feature story.

We see that the availability of separated wavefields provides significant geophysical advantages and operational flexibility for both towed streamer and ocean bottom seismic 4D. Combined with advances in both the control and measurement of source wavefields, the latest PGS abstracts demonstrate that a few large gains can still be achieved in the quest for 4D seismic precision in addition to incremental advances in ‘best practice’ workflows.