PGS has acquired more than 30 000 sq. km of 4D data using GeoStreamer technology. The results have demonstrated superior repeatability with streamer and source steering, accurate elimination of rough sea noise with multisensor data, and compatibility with all other seismic data acquisition techniques.

A time-lapse 3D, or 4D project involves repeating 3D seismic surveys over a producing hydrocarbon reservoir to identify changes in the physical state of the reservoir due to production. Such time-lapse surveys are used to optimize the planning of producer and injector well placements, as well as monitoring the overburden to detect any geomechanical changes associated with compaction effects. The first survey is the baseline survey, and each successive survey is a monitor survey. Ideally, the acquisition geometry and hardware are repeated exactly from survey to survey, as are environmental conditions, so that any observable difference in the seismic response is derived entirely from physical changes in the reservoir.

All PGS vessels are equipped with steerable sources which minimize lateral deviations in source positions and create better conditioned baseline and monitor surveys. These systems improve survey efficiency and increase repeatability by minimizing the effects of variable currents on the acquisition geometry.

Over a decade ago, PGS started developing steering capability for every one of the six source sub-arrays towed several hundred meters behind each Ramform vessel to provide the freedom for each sub-array to steer itself along survey pre-plot lines whilst the vessel steers to optimize the streamer spread locations. The steering devices shown in the figure below enable fully automated steering where each sub-array can move laterally up to ± 40 m from the natural towing position, and the mean lateral source position error from the target trajectory is less than ± 2 m.

In the PGS seismic vessel fleet, a dense acoustic network positioning system links the precise locations of the vessel, each paravane, each source sub-array, and locations along each streamer for every shot. This acoustic positioning network is integrated with global-positioning-system (GPS) units mounted on the vessel, each paravane, each source sub-array (two GPS towers per sub-array), and the rear of each GeoStreamer. The collective streamer positioning (SPOS) system is interfaced onboard each PGS vessel with a navigation command and control system and is used to control both the depth and lateral control devices mounted along each GeoStreamer and the gun steering system (GSS) mounted on each source sub-array.

Our proprietary streamer steering solution, developed in partnership with Kongsberg, offers both depth and lateral steering control. Attention was given to building a fully integrated, low-diameter streamer system that does not cause drag or turbulence effects at the bird location, and is low-noise even under vessel line turning conditions. Streamer feathering can typically be controlled in an automated manner within ± 3°. The use of a very dense and large array of streamers, a Ramform vessel hallmark, also ensures the maximum availability of CMP offset class traces for matching the source and receiver positions during 4D data processing. Furthermore, the towing of additional ‘overlap’ streamers outside the nominal streamer spread ensures that CMP fold at all offset classes is preserved whenever streamer feathering affects the longer offsets.

Active control and monitoring of the emitted wavefield from the source is part of a standard 4D solution. To further improve repeatability in the presence of currents that may cause cable feathering, PGS recommends redundancy in the streamer spread, i.e. to acquire the data with more streamers than in the nominal configuration. Typically, this means one or two additional streamers on each side of the spread in an overlap configuration.

Multisensor GeoStreamers can be towed deep in a low noise environment without being affected by traditional free-surface ghost effects, and in a manner that mitigates how variations in sea state affect the recorded seismic wavefield at each receiver location. A signal processing solution known as wavefield separation provides the highest fidelity 4D data platform, as well as enabling backward-compatibility to legacy hydrophone-only baseline acquired with shallow streamer depths.

The use of flat streamer depth profiles for 4D survey matching in processing ensures that the seismic wavefield has consistent spatial and temporal signal properties everywhere, which is important for any trace interpolation fidelity during data regularization, and for the accuracy of trace matching during 4D binning in processing. By the use of multisensor GeoStreamers, flexibility is introduced into how the front end of streamers can be configured to reduce drag, streamer tension, and associated mechanical noise.

The level of 4D noise for a given combined source and receiver position error can then be reduced by limiting the exposure of the acquisition system to dynamic sea-state and environmental noise during survey acquisition, thereby improving 4D signal detectability. Deep towing of GeoStreamers enables the sea-state effects to be removed while maximizing signal bandwidth. Furthermore, variability in the emitted source wavefield is removed using calibrated shot-by-shot source signatures.

PGS has demonstrated that GeoStreamer is backward compatible with existing conventional baseline or monitor surveys. This is achieved through wavefield separation and recombination of extrapolated up- and down-going wavefields and summation of the two to yield the total pressure field compatible with a vintage survey in a fully AVO-compliant manner. Although historically this often meant downgrading the GeoStreamer data (reinserting the free-surface ghost effects), modern processes are now commonly used to upgrade the legacy data in a 4D-friendly manner to achieve a more accurate and reliable image of the 4D difference. PGS can correspondingly also deliver P-UP deghosted (receiver-side) broadband data

In the height of the Covid pandemic, Vår Energi commissioned PGS to conduct a dual-azimuth 4D monitor survey over their Goliat field in the Barents Sea. Challenges included complex multiples which can mask the 4D signal and a short Barents Sea weather window.

Detectability and Repeatability in 4D Acquisition

Many dynamic forces can mask subtle reservoir signals but a series of engineering innovations allow the towed streamer seismic data acquired during any PGS 4D survey to be relatively insensitive to these forces. 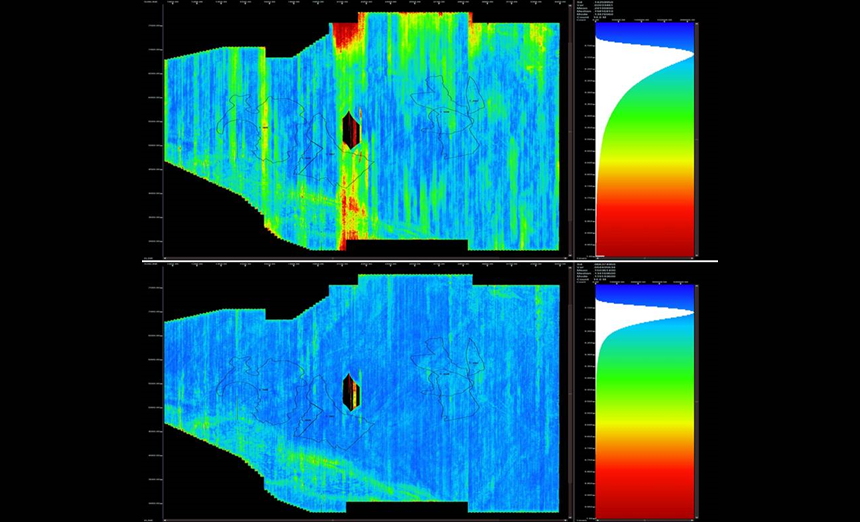 As the adage says, you can't compare apples and oranges. Recording the right baseline and monitor data is vital in production monitoring. Safeguarding repeatability is equally important during seismic processing.