The powerful Ramform design, with its delta hull and capacious broad beam, offers stability and reliability in all conditions and environments, making this the ultimate platform for efficient and safe seismic operations.

The iconic Ramform hull shape was designed in Norway and the first seismic Ramform vessel was inspired by the Norwegian naval intelligence vessel Marjata.

A sinusoidal waterline allows stable motion behavior at the beam. Meanwhile, the vast back deck is perfect for storing and towing an unprecedented array of equipment and spares, while the generous interior offers additional instrument room capacity and superior working and living conditions.

PGS acquired the rights to the unique design based on an agreement to build six Ramform seismic vessels. It has been so successful that we have built twice that number.

Ramform Explorer was launched in 1995 and set a trend for the class by immediately smashing all performance and endurance records for 3D seismic operations. The Ramform Challenger (1996), V-class (1998), S-class (2008) and Titan-class (2013) each changed and expanded on that original design, bringing more power and capacity, breaking new records, as well as increasing safety, reliability, efficiency and ultimately data quality.

The Ramform Titan and sister ships Ramform Atlas (2014), Ramform Tethys (2016) and Ramform Hyperion (2017) are designed to fully utilize the potential of GeoStreamer®, including the capacity to record ghost-free data in rougher seas.

These are our largest seismic acquisition vessels so far: with more towing capacity, more power, and greater flexibility. Seventy meters wide at the stern and equipped with 24 streamer reels, with quality and reliability built in at every stage, they are designed for safe and efficient operations in even the harshest of environments. 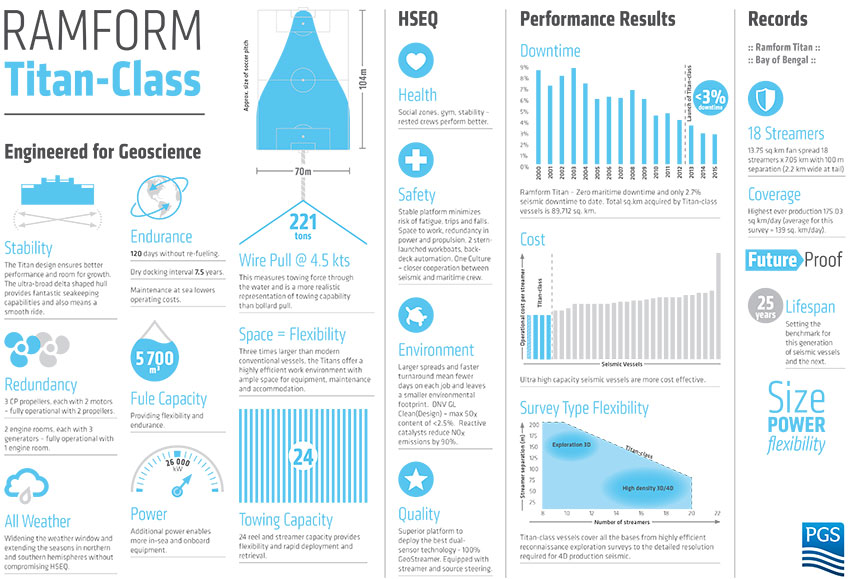 All vessels in the PGS fleet are fully equipped with GeoStreamer. Roll out across the fleet began in 2007, immediately after the launch of this pioneering multisensor technology. Today, PGS is more experienced in broadband acquisition and processing than any other contractor.